Council holds back on support for proposed dry dock 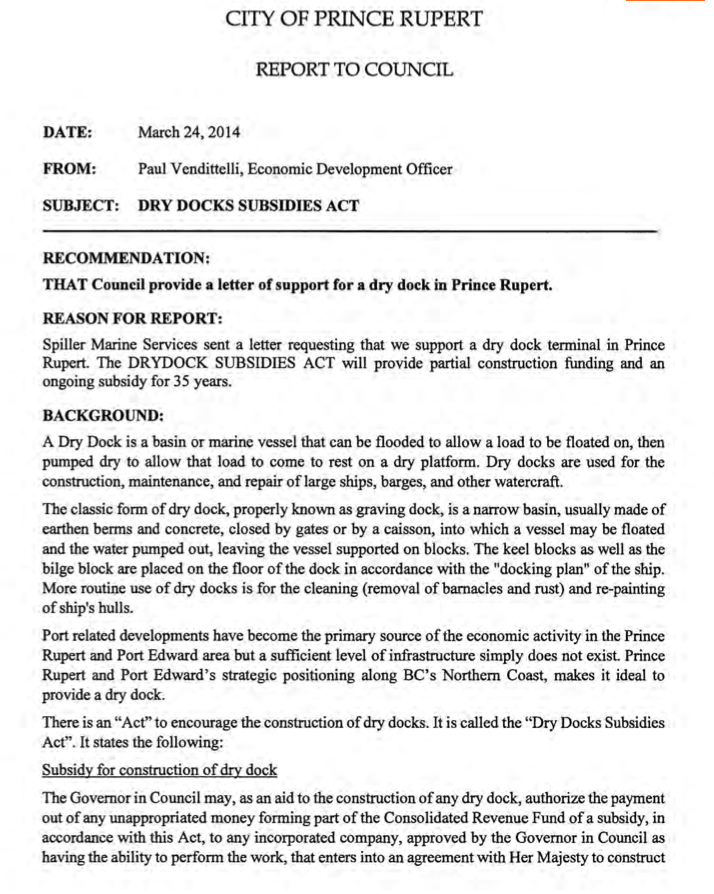 It didn't appear to be a controversial topic when it appeared on the Agenda for Prince Rupert City Council, a simple request from the City's Economic Development officer, that the city write a letter of support for a Dry Dock Proposal for the city.

The proposal as outlined from Monday's agenda (page 11)  was one from Spiller Marine Services, who were basically asking for a letter of support from the City that outlines that a dry dock is need and in the public interest. The nature of the city's letter would be is assistance of the proponent in their application for a grant subsidy from the Federal Government.

Other than the city's letterhead and words of support, there would be no cost, or budget implications associated with the letter for the City.

In his conclusion, the city's newly hired economic development officer Paul Venditelli advised that "the dry dock project would be a regional asset,  supporting the economy and creating employment opportunities for residents."

As the process continued, Councillors Garon and Ashley had offered up initial support for the motion to write the letter of support, neither seeming to find issue with the request.

However, it appears that the request did not sit well with  Councillor Joy Thorkelson who weighed in on the theme, suggesting that Council hold off on the requested letter until staff had time to contact McLean's shipyard and seek out their thoughts on the topic.

Councillor Thorkelson's concern was one that the city may be perceived as supporting one business at the expense of another. She made particular note of how McLean's had stayed with Prince Rupert through the tough economic times.

Perhaps her Council counterparts were weary from the long night, or maybe they just have no opinion when it comes to economic development. As her request, that Council table the issue until staff  could contact the existing shipyard was accepted, with no discussion from the remainder of council on the question.

While most may understand the concept of concern over an existing local company, we're not sure this should be the over-riding issue for the City, which we would think should be seeking out any and all economic opportunity for the community.

The handling of the letter of support issue does make for an interesting approach to economic development, particularly for a council that had just spent close to two hours examining their financial woes and outlining the need to find ways to bring more industry in the city to help defray the burden on the residential tax payer.

By not offering up support to the prospect of a dry dock, the city could be perceived of sending out a message that the economic picture isn't particularly a positive one locally and that there is no need for this kind of infrastructure in the region, not exactly the image a city government should be looking to project.

As they try and figure out their current financial predicament, Council may wish to give some thought to the mixed messages that they seem to send out to industries that show interest in locating in the community.

You can review the discussion on the letter request from the City's Video Archive, it's probably one of the shortest items of the night, taking up but two minutes of council's time, from the 2 hour and thirty three minute mark, running to the 2 hour thirty five minute mark.

There are more items from council sessions available from our archive page.
Posted by . at 8:34 AM

Email ThisBlogThis!Share to TwitterShare to FacebookShare to Pinterest
Labels: Council tables letter of support for a dry dock proposal, March 2014