It was an interesting place to find the Port providing a rebuttal to some perceptions in the community,  as President and CEO Don Krusel provided some talking points for the community, by way of a letter to the editor of the weekly newspaper.

With the Port currently involved in negotiations with the City of Prince Rupert regarding their Payment in lieu of Taxes requirements, there has been a bit of a backlash by some towards the Port, with some suggesting that the Port is not paying a fair amount in compensation to the City.

It's a perception that at times finds itself introduced in discussions at Council, with some Councillors expressing frustration, at what they feel is not a large enough financial contribution from the Port.

In his letter to the weekly paper, Mr. Krusel would seem to be providing some of the counter points to those perceptions, while at the same time, not having to sit through one of those presentations to council sessions, which at times come across as more of a Civic inquisition.

For the most part, the letter provides a bit of background on the nature of the Port's work in the community and how the Port and its partner terminals operate.

With Mr. Krusel highlighting the six million dollars in revenue that the Port delivers to local municipalities and how in the case of Prince Rupert, that revenue has made up a substantial portion of the City's operating budget, providing stability to the community through a period of declining industrial tax revenues. 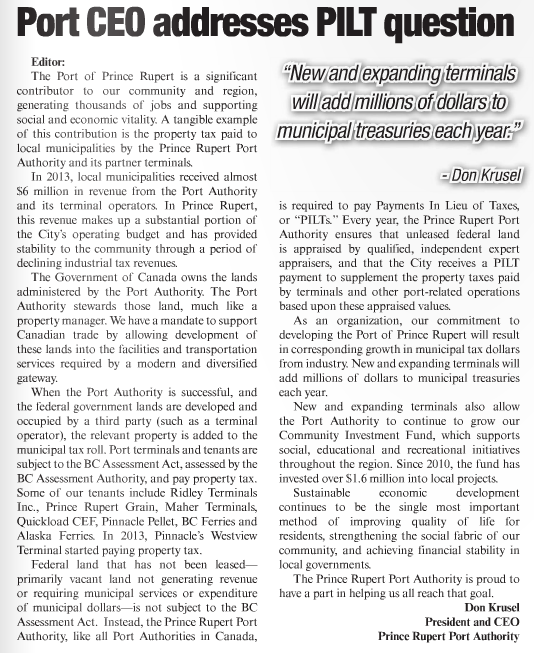 That point is followed by a listing and explanation of the financial contribution of some of the major groups on the Prince Rupert waterfront at the moment, such as Ridley Terminals, Prince Rupert Grain, Maher Terminals, Quickload CEF, Pinncale Pellet as well as BC Ferries and Alaska Ferries.

Mr. Krusel then addressed issues of PILT, outlining how Federal land that has not been leased and is primarily vacant land that is not generating revenue or requiring services is not subject to the BC Assessment Act and instead falls under the Payment in Lieu of Taxes regimen.

He further provides background on how the PILT process works, with an independent appraiser providing the appraised value of those lands that fall under the PILT process.

As for contributions to the community beyond the PILT payments and those properties that pay property tax, Mr. Krusel then highlighted the Community investment fund introduced in 2010, which thus far has invested some 1.6 million dollars into local projects.

All of it an interesting recap of the process that the Port is involved in,  a  side of the current funding issues which haven't heard a lot about during the lengthy council sessions dedicated towards the city budget process so far.

You can review his complete listing of the Port's contributions both monetary and by way of community interest, from the Wednesday e edition of the Northern View, Mr. Krusel's letter can be found on page A5
Posted by . at 8:19 AM