The Western Michigan University Broncos are heading for the NCHC Quarterfinals, after a split of weekend action in North Dakota.

Though for Prince Rupert's Frank Slubowski, the weekend proved to be one of watching from the bench, over playing on the ice.

Broncos head coach Andy Murray chose to start Lukas Hafner in the weekend showdown with North Dakota. Staying his course despite a Friday night loss, his confidence in Lafner was rewarded with a Saturday victory, the first ever for the WMU program over North Dakota.

Despite the success of Saturday night, the Bronco's ceded the opportunity for home ice advantage in the playoffs to come this weekend, resulting in their playoff path to be one long road trip for the rest of the way.

Reviews and background on the weekend games can be found below 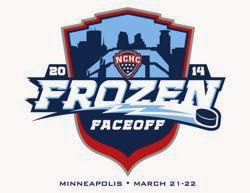 The Broncos now travel to Duluth Minnesota, for the first of what they hope will be a lengthy run through the NCHC playoffs, with a spot in NCHC finals in Minnesota March 21st and 22nd.

Success through the NCHC could provide the Broncos with a shot at the Big Prize in US College hockey that of a berth in the Frozen Four in Philadelphia.

How much time Slubowski, the PRMHA alumnus will see in playoff action, appears to be only known to coach Murray.

He has tended towards starting Hafner in many of the high profile games so far this year, and stayed with him for the final game of the regular NCHC season.

Still, the need to be focused and ready to take to the ice at any time will be on the mind of Slubowski as he seeks to work his way back into the confidence of his coach, at the most important portion of the NCAA season.

The Broncos play Friday and Saturday in Duluth.

Previews of the week ahead can be found below in the lead up to the weekend puck drop.

We have more on Rupertites playing sports at university or other locations on our archive page.