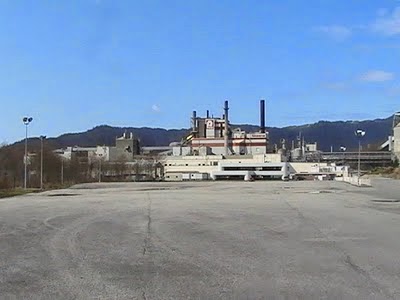 Watson Island, the tar pit of Prince Rupert politics is bubbling once again, with word that the Watson Island Development Company is taking the City to court.

With the would be owner of the old pulp mill site seeking a legal decision over issues regarding the industrial site that once held the region's economic base and what was hoped would soon be an economic engine again.

"WatCo continues to be committed to the people of Prince Rupert, and to the purchase of Watson Island and the significant remediation and redevelopment work required to ensure that this important local asset is productive again and contributing to local employment and the tax base in Prince Rupert,"-- Part of the text of a statement from Watco Company President David Austin

Yes, just when we thought it was clear sailing for the industrial site on the outskirts of the city, Rupertites learned Thursday of the latest twist, a new shift in the plot if you will, in what has to be one of the longest running sagas in Northern British Columbia history.

The latest troubles at the Watson Island site and the return to the courts, apparently being placed at the door step of the Mayor  and Council.

That at least according to this press release from Watco on Thursday.

The key takeaway being: WatCo Director and Company President, David Austin, stated that he was extremely disappointed at the sudden change in direction by the City's Mayor and Council, precipitating the need for WatCo to commence litigation.

Further into the information package released by WatCo is a hint as to when the discussions over the sale of Watson Island may have fallen off the rails, with a reference that the two parties were still talking up until February to settle the terms of a definitive agreement.

With WatCo stating that at that time, they accepted all of the terms of the definitive agreement proposed by the City and the City then advised that it would not proceed with the sale of Watson Island to WatCo.

Another quote from the company would appear to offer up some of the background to the current status of the situation.

"WatCo has paid in good faith millions of dollars to the City over the past two years and now we must take legal steps to protect our shareholder's interests." -- WatCo Chief Executive Officer, Perry Braun outlining the company's position in its move to the courts.


As well, in order to protect their interest in the situation, the Watson Island Development Company has filed a Certificate of Pending Litigation, so as to prevent the land from being sold to others while the litigation is outstanding.

According to a story in the weekly paper the Northern View, the Mayor was not available for comment on the situation, which if past history is any indication isn't a particularly great omen for those that may wish to know what's going on.

If past is prologue, then it may be helpful to take a refresher course on the lengthy tribulations of the Sun Wave days.

A time when more often than not, City Council took to the closed session of council to discuss the issues surrounding that court fight.  With updates for the public in open forum few and far between.

Today's shocker comes almost one year to the day, when the Mayor offered up a stark synopsis of the Watson Island situation and the impact of the time as to what it all may have meant for the City with the endless litigation, and now, well one year later, suddenly here we go again...

Clearly council needs to get out in front of this story this time, and offer up some kind of explanation as to what has gone wrong this time.

And more importantly for the city's residents, offer up a much more open approach to information sharing with the public.

Considering things seemed to deteriorate in February, Council it would appear had at least two opportunities to offer up a heads up for the public, advising that there may be trouble on the horizon once again, for what seems like an endless horror story.

As recently as March 10th, the City Manager in his report to Council advised on the topic of Watson Island stating that the city "continued to strive towards their goals on that issue, though those items must remain in camera in nature"

No alarm bells there, just the usual notice that it was something that council prefers to discuss in closed session. Though we suspect that the public will be looking for some answers this time around.

It's surely going to be puzzling to Prince Rupert residents as to why, with an apparent deal in hand and after the long nightmare of the Sun Wave Days, the City, if the WatCo information is correct, decided to not accept the negotiated deal.

The last thing anyone in Prince Rupert probably wanted to hear was Watson Island is back in the news and back in court, yet apparently here we are again.

With the developments of Thursday, it looks like we'll have to dust off the archive box of the Watson Island files, you can find updates on the situation placed here as the story moves forward.

Email ThisBlogThis!Share to TwitterShare to FacebookShare to Pinterest
Labels: March 2014, Watson Island issue to return to a court room