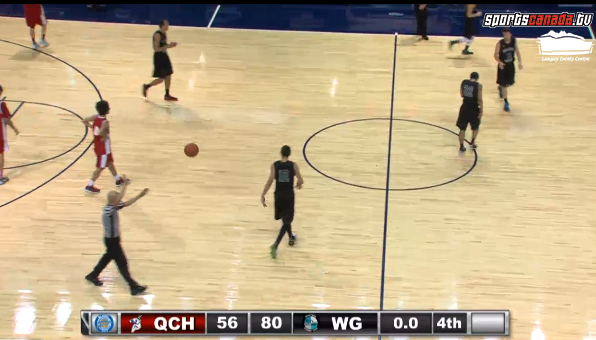 The Cinderella story of the Queen Charlotte Saints arrival at the AAAA Provincial Tournament will take a slightly different twist in its telling after Day One.

The Saints struggled in the first quarter of their opening game, giving their opposition the defending Champion Walnut Grove Gators an early lead, one that the powerful squad almost surrendered once, and only once, but in the end never relinquished.

That's not to say that the Saints didn't battle back, regaining some of their timing and balance heading towards the half, they shaved the Walnut Grove lead down to ten points, heading into the dressing room trailing by a 35-25 score.

Readjustments clearly were discussed as the team came back out for their second half, they seemed more confident in their defensive play and began to run that high temp offence that they became known for following their previous treks  this year to the Lower Mainland.

The Saints put on a third quarter push, pulling to within three points of the highly regarded Langley Township team. The sudden surge of Saint scoring, sending a wake up call to last year's champions, sparking them to return to the early aspects of the first half that had them playing with confidence.

With the scare from the Saints quickly behind them, Walnut Grove wasn't about to let their full control of the game slip away from them again, returning to a theme of pressure on the Saints in both ends of the court.

Making the key shots when required and denying the Queen Charlotte Squad territory on the offensive play, keeping many of their shots to the perimeter and not cracking when the Saints turned on a bit of an offensive push.

By game's end, Walnut Grove was in their groove, slowing the game down when required, pressuring the Saints, limiting their shot lines and finally putting away the tournament opener, by a final score of 80 to 56.

The Saint's won't have much time to think about their day one setback, with a tight schedule that waits for no time for second guessing.

And if past experience is any indication, the Saints will make note of their mistakes from Wednesday, make their adjustments and come back ready to get back onto a winning track.

That opportunity arrives Thursday morning at 11:45, when they take to the court at the Langley Events Bowl Arena. The Saints opponent will be determined as tournament play comes to an end on Wednesday evening.

You can follow the progress of the AAAA Provincial Tournament from our anchor page, where you can find results, items of interest on the tournament and our link to Streaming Video for Queen Charlotte games through the week.

For a review of our past items on the Saints as we tracked their path to the Tournament through our Rainmaker Archive page.
Posted by . at 5:14 PM