Saints find their offence and then some in Game Three 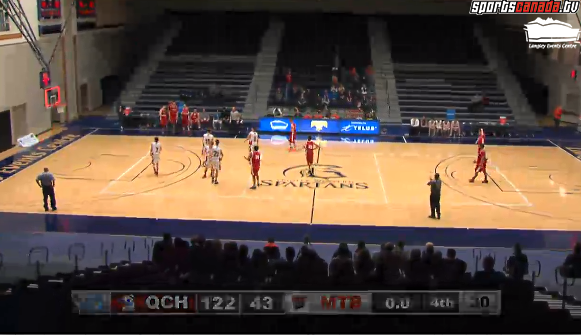 For the Queen Charlotte Secondary Saints, Game Three of their journey to the AAAA Provincial tournament finally provided a sample of the offensive part of their game that many were waiting to see.

Friday, the Mount Baker Wild was the squad had the unfortunate role to play on the day, that of the team that would suffer from all of that pent up Saints frustration of the past two days. As the team from Haida Gwaii poured on the scoring early and never really let up on the accelerator.

In full control from the opening tip off, the Saints rolled to an early lead and built it up to a 29 to 10 lead by the end of the first quarter. A double digit lead that provided a sense of what was to come as the Saints found that pretty well everything they fired off at the Mount Baker basket counted for points.

Threes, lay ups, foul shots, whatever was offered was converted by the Saints, as Jesse Barnes and Nathan Vogstad combined for some impressive point runs, the two shredding the Wild defensive sets on almost every offensive rush.

By half time the game was securely in the Queen Charlotte School's hands, the Saints delivering a blistering 56 points in just twenty minutes of play. As shots that eluded them on Wednesday and Thursday went down in rapid fashion, leaving the Mount Baker team to try and formulate some kind of plan to at least slow the Saints down in the second half.

That however was not to be, the half time break only allowing the Saints to re-calibrate the offensive engine, as they dominated Mount Baker in both ends of the court, defensively shutting down any attempts at approaching the basket.

When on the attack their crisp passing plays ran like clockwork, the end result of almost every entry to the Wild end becoming either a two or three point play. By three quarter time, the Saints were long past having to worry about going home without a win, a 95 to 27 lead sealing their first victory away before the final ten minutes were played.

No doubt the thought of playing with no stop time might have been a wish for the Mount Baker coaches, their team clearly a dispirited group through the third quarter, most likely just hoping to get to the end of the game and the chance to forget about Friday.

The final ten minutes also perhaps offered up the first glimpse of a controversy at the AAAA tournament, with many suggestions post game that the Saints probably should have been subbing in their bench players much earlier than they did.

As it was the Saints head coach Desi Collinson, left his top scoring duo  in the game until about halfway through the fourth quarter.

By the time Nathan Vogstad came out of play, he had accumulated an astounding 75 points, a AAAA tournament record in one of the most dominating displays of offence seen in a while.

Jesse Barnes shortly followed his team mate to the bench and with the tandem finished for the day, the final four minutes of play passed by with little of the the offensive show that had taken place in the previous three quarters.

You can understand the desire to reward his top players with court time and exposure in a top flight tournament, yet for a young coach understanding timing is everything.

The Saints have built up a reputation of success through the winter and more than a bit of good will through the week.  Considering their profile and the work ethic they bring to the court, one imagines that they will be returning to the tournament in years to come.

Much notice we suspect will be made of the final score of Game Three of Friday, a performance that will probably be remembered by more than the Mount Baker squad in the years to come.

Moving his two premiere players to the sidelines earlier in the third, probably would have been the more generous gesture, particularly in a game that clearly had been won by the half.

Still, players want to play and when they are on the court, they want to score. Something the Saints accomplished rather handily to the finish, registering a 122 to 43 victory by the final buzzer.

Beyond the score, the actual team work that the Saints displayed was exactly what everyone anticipated when this tournament began. The first three quarters of Friday's game, just a sample of the kind of explosive offence that the Queen Charlotte team has become known for.

They won't be bringing a AAAA banner back to Haida Gwaii this time around, but they won't be going home without a win either and may yet add to the W column with Saturday's game.

Through the week the Saints have set the table for their program for the future, showing that a small school can excel on the biggest of stages.

Queen Charlotte Secondary has one more game to play in Langley, a Saturday afternoon match up with  the Pitt Meadow Marauders. Game Time from the Langley Entertainment Centre Gym is 1:45 PM.


You can follow the progress of the final day of the AAAA Provincial Tournament from our anchor page, where you can find past results, items of interest on the tournament and our link to Streaming Video for Queen Charlotte's final game of Saturday.

You can find more of our past items on the Saints, as we tracked their path to the Tournament on our Rainmaker Archive page.