Queen Charlotte Saints put a wrap on their tourney, keeping Pitt Meadows on their toes

The week long story that was the Queen Charlotte Saints played out its final chapter on Saturday afternoon, as the school from Haida Gwaii took to the court for their last game of the AAAA Provincial Tournament.

A finale to the week, that probably had coaches Desi Collinson and Dave Wahl wishing they could have gone to the bank from Fridays explosive offensive performance. Making use of some of that scoring on Saturday, where even a small portion of Friday's 122 point performance, might have turned the tide in game four.

Saturday afternoon the Saints were matched up with the Pitt Meadow Marauders and the Pitt Meadows team had clearly done their homework on what the Queen Charlotte School could bring to the court.

With the teams trading off some 3 point shots to launch the game, Pitt Meadows quickly morphed into a defensive game which denied the Saints many scoring opportunities inside the paint, while on the offence the Marauders took advantage of their looks, quickly building up a twelve point lead by the midway point of the first quarter.

That was a blue print that carried them through most of the first quarter, as shots that dropped for the Saints on Friday, bounced off rims or deflected off the backboards on Saturday.

Nathan Vogstad, who had a highlight reel game on Friday, helped to slow down the Pitt Meadows roll, he with some timely threes along with some a string of shots from Jesse Barnes, began to push the Saints back in the right direction on the scoreboard.

Still Pitt Meadows appeared determined to not get rattled, settling the game down, holding to a 30 - 16 lead by the end of the first 10 minutes.

Heading into quarter number two with a fourteen point deficit, the Saints put a bit of a push on in the first two minutes, grabbing a six point run, and edging to within eight of Pitt Meadows.

Once again though, the Marauders stayed on focus returning to a defensive game which gobbled up rebounds, denying the Saints many second chances, pushing Queen Charlotte to the perimeter where try as they did, three's would not come as frequently as on Friday.

The teams would score and reply through the majority of the second quarter, with the work on the foul lines providing for incremental gains for Queen Charlotte as they narrowed the Pitt Meadows lead to 9 by half time.

The half time speech in the Saints locker room must have been a beauty, as Queen Charlotte came out on fire in the third quarter, dominating the play in the last three minutes.

Impressive steals, combined with steady passing and making good on the suddenly open lanes, helped the Saints to deliver some push back. Closing the gap between teams not only on the scoreboard, but in the flow of the play as well.

All of which left Pitt Meadows fortunate to head to the bench with a 69 - 65 lead, leaving but four points as the difference by three quarter time.

As they caught their breath and went over the plan for the final ten minute,  the Saints no doubt made note as to how far they had come back in just thirty minutes of play

The break in between quarters provided a much needed opportunity for the Pitt Meadows coaching staff to make adjustments, finding solutions to counter the surging Saints attack.

Turnovers provided a set back for the Queen Charlotte's momentum as the final quarter launched, as Pitt Meadows with some aggressive play grabbed a couple of key steals to push their lead back into more comfortable territory.

Holding the Saints at bay by ten points for much of the play of the first five minutes of the fourth.

Still there was to be one last push by the Saints who were looking to end the tournament at the .500 mark.

Playing some desperation basketball in the final five minutes, they climbed back to within five points, trailing 77 to 72 with three and a half minutes to go.

Aggressive basketball however does bring some foul trouble and Pitt Meadows took advantage of the the bonus point opportunities to start to rebuild their lead, extending the margin to twelve points by the two minute mark.

As the Saints pressed in the final 120 seconds, Pitt Meadows returned to a defensive game that kept Queen Charlotte to the perimeter shots, strong rebounding on the part of the Marauders would send the play back to the Saints end, with strong shooting or foul opportunities helping to put the game away.

The final score of 92-77 clearly not an indication as to the closeness of the game through 17 of the final twenty minutes of the second half.

The Saints arrived in Langley with much attention and they'll return to Haida Gwaii with one win out of four in tournament play, but having delivered the message that the small schools which play with large heart, can not only compete, but excel on the large stage.

The week in Langley has provided for much notice of the Queen Charlotte School program, something that will pay dividends for the Saints in years to come.

More important, however was he team work that the Queen Charlotte school showcased and the spirit which they brought to Langley. An infectious thing, that had many talking about the Saints for most of the week.

Some members of this team now move on to new challenges, their high school years now almost complete.

Among them Nathan Vogstad, who had a monster of a tournament and is now destined for Simon Fraser University, where we imagine Head coach James Blake and his SFU coaching staff no doubt are looking forward to having him bring his game to the NCAA.

Many others from this years roster will return to the Saints next year. A new group looking to make their name in the Big City in March, ready to provide for the dreams of those still to pull on the uniform in the years to come.

Listed below, for one final time from 2014 Provincials, the Queen Charlotte Secondary School Saints! 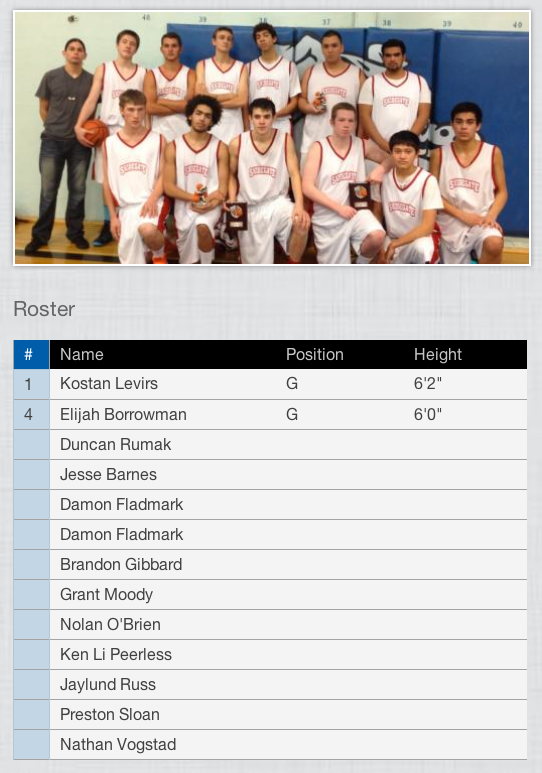 You can find a review and listing of articles from the 2014 AAAA Tournament from our anchor page.
Posted by . at 5:33 PM