Prince Rupert drops further down the Moneysense ratings in 2014

The latest results from Moneysense magazine have been delivered, providing their annual snap shot as to how Canadian communities compare on a wide range of categories.

Last year, Mayor Mussallem dismissed the findings from the financial publication, advising that he was unfamiliar with  the criteria used by their researchers. Offering little comment on the review which placed the city towards the bottom of the listings.

If results for 2014 are any guideline, it would appear that there will be no need for the Mayor to give thought to a renewal of his subscription to the magazine this year.

As well on the theme of reaction, we're going to miss the take of the weekly paper, which last year at this time  delivered a scathing indictment of the methodology and findings of the financial media portal by way of editorial.

In fact so annoyed was the weekly paper with the financial publication's statistical review for 2013, that with much bombast they advised that it would be the: "last time The Prince Rupert Northern View ever discusses Moneysesne Magazine's rankings ever again."

And still, despite all of that feedback from the North Coast, Moneysense carried on and provided for yet another review. Releasing their annual report for 2014 on Wednesday.

Findings which deliver Prince Rupert two spots further down the list for the year, with the city pegged with an overall ranking of 195 out of the 201 cities surveyed.

With little seemingly improving from the 2013 survey, when the city was listed at 193 out of 200.  And long gone for now it would seem are the halcyon days of 2012, when Moneysense had us ranked at 179th place.

Even when the stats are reduced to reflect only small cities,  Prince Rupert is still a fair way down the listings rated at 135 for the 2014 review, five spots away from the bottom.

For 2014, the small city category is led by such communities as St. Albert, Alberta, Boucherville, Quebec and Fredericton, New Brunswick.

By comparison Terrace, the only other Northwest BC community reviewed in the survey, received a ranking of 110 overall.  Claiming 65th place overall in the small city category.

For 2014, Moneysense touched on many of the same economic and social indicators as in the past and found for the most part, not much has improved for Prince Rupert in the last 365 days bewtween reviews. 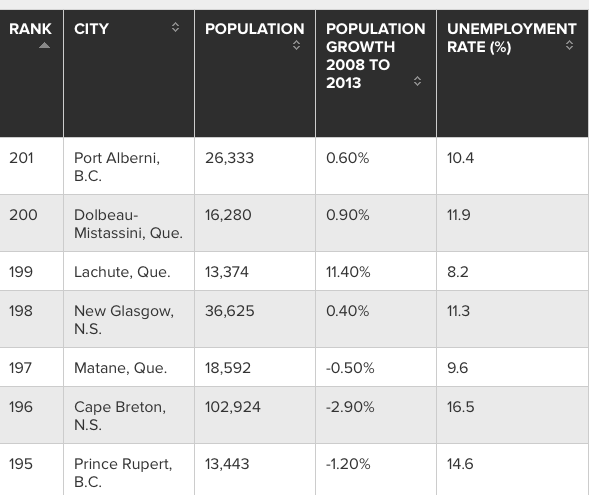 Beyond the bad weather category, a title which Prince Rupert seems to claim by by default in the review each year. Other categories such as medical care and access to the arts and public transportation provided a snapshot as to how Prince Rupert compares with other Canadian cities..

However, it's when it comes to the main categories of note, where Prince Rupert's numbers begin to decline.

Such things as Population growth, Crime, Unemployment Rate and Average Household Net worth, were all items that the Moneysense  review notes were themes that remain problem areas for the community.

The  full report on all topics,  can be found here.  Click on the arrows in each category to determine where Prince Rupert can be found in each item of interest.

The publication provides a complete examination of their findings, including the methodology involved with it and an even offers up an answer to the critics of the report (Mayors, newspaper publishers et al) who suggest that the review isn't complete.

Or as Mark Brown from Moneysense  puts it: This isn’t the best places to visit, it’s the best places to live. If you’re going to plant roots somewhere we think there should be good access to medical care, low crime, good public transportation and, yes, nice weather.

Above all, the best places in Canada have to be affordable. That’s why measures like housing prices, employment and wealth are particularly important, and are given the greatest weighting in our methodology.

It's unfortunate that locally (except for this blog post), the Moneysense report will probably receive little attention, or a review of the findings.

A discussion on the themes that the publication has offered is something that would be of benefit to the community and certainly should be of concern to Prince Rupert City council.

Whether  or not you agree with the methodology of the survey and the findings that have come from it,  this is a view of Prince Rupert that is being delivered from coast to coast.

Something that the city should make note of, if wants to be perceived as an attractive place for business and a location for Canadians to relocate to.

The Moneysense review does not suggest that the community is lacking in charm, friendliness or opportunity, what it does do however, is to review problem areas that clearly need a bit of attention.

The report will appear in print when the April magazine is distributed.