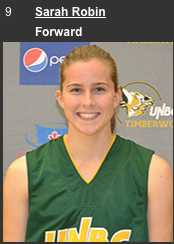 The 2014 edition of the UNBC Women's Timberwovles are currently getting back into their Basketball routine, with a pre season of training and exhibition games to prepare for the upcoming CIS season.

This years squad will be a fairly young one, with many of the team's experienced players of the last few years having graduated from the Prince George based University.

That will mean an enhanced leadership role for Prince Rupert's Sarah Robin, who in her fifth year with the T-Wolves  was named captain of this year's squad and will be asked to settle down the youngsters as the season moves forward.

Already Ms. Robin has been showing some of that steadiness providing strong contributions in the Timberwolves preseason games so far.

Her work during a pair of of late September contests with Trinity Western Spartans, offering up a glimpse of what may be to come in year ahead.

In that pre-season opening series, the UNBC forward snared 17 points and five rebounds in the first game and collecting 14 points for the T-Wolves in the second.

The pre-season learning curve for the young UNBC squad however has left them on the short side of the won-loss stats with a pre-season record of 2 wins and four losses.

You can review the latest news from the UNBC training camp from the items below.

The regular season for UNBC starts up this Friday, with a pair of road games in Kamloops against the Wolfpack at Thompson Rivers University.

You can view those games through the CanadaWest video portal.

As the 2014-15 CIS continues we'll provide more items of note on Ms. Robin's travels with the T-Wolves through our archive page of Rupert athletes here.

More items of note on the UNBC basketball program can be found here.
Posted by . at 8:48 AM