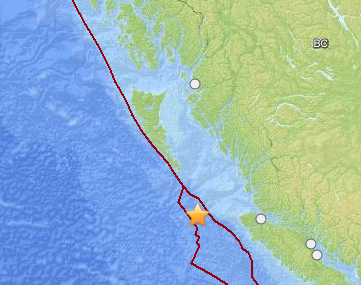 The latest of recent earthquakes along the BC coast took place at just before 6 PM this evening as a 4.2 magnitude quake was recorded 200 kilometres west of Port Hardy, the epicentre was 389 kilometres south of Prince Rupert.

No Tsunami Warning was generated from this evening's event.

Listed at a depth of 10 kilometres, it is the second quake of the New Year in the area, on January 2nd a 5.2 magnitude quake was recorded Southwest of Bella Bella in much the same region as this evenings moderate quake.

The two temblors of this week follow on the heels a string of six in late December in an area situated between the southern tip of Haida Gwaii and Port Hardy.

You can review the previous seismic events from our archive page here.
Posted by . at 6:53 PM

Email ThisBlogThis!Share to TwitterShare to FacebookShare to Pinterest
Labels: 4.2 magnitude quake off of Port Hardy Jan 3