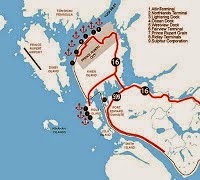 While Coal and Log exports were decidedly down over the last twelve months, the blow that such decreases could have provided  appears to have been cushioned by the diverse options that now make up the Port of Prince Rupert locations.

From their year end numbers the Port Authority observed how overall port tonnage was down by some 10 percent, owing for the most part to the troubled coal and log export sectors.

As we reviewed on the blog through much of 2014, Coal shipments out of Prince Rupert have suffered through 2014 owing to the current troubles in the coal sector world wide.

At year end for 2014 Coal exports were down 41 percent overall, while log shipments out of Prince Rupert declined by close to 16 percent.

And while the results of 2014 were not good for those two sectors, the impact of such shifting results was moderated by some of the other export gateways that the Port provides on the North coast.

Prince Rupert Grain topped the year's numbers highlighted by a 25 per cent in crease in exports, while the Fairview Container Terminal also saw increases, with throughput moving upward by 15 per cent from 2013 numbers.

The Westeview Wood Pellet Terminal, completing its first year of operation posted over half a million tonnes of bio-fuel shipped to world markets in 2014.

In a media release from the Port on  Friday, Port of Prince Rupert President and CEO highlighted toe hard earned reputation of the port, gained through the work and efficiencies created by those that work at the many facilities in the region.

“The enviable global reputation of all Prince Rupert’s terminals is owed to their hard-working men and women,” ... “Their commitment to safety, efficiency and reliability is the foundation of our ability to handle unprecedented cargo volumes — with more to come in the year ahead.”

You can examine more on Friday's year end review from this item from the Port of Prince Rupert, for the full picture of exports and imports through 2014 at Port Facilities see their Performance chart here.

For more items related to the Port of Prince Rupert see our archive page here.
Posted by . at 11:54 AM