On Monday afternoon, the Federal Government announced a new funding program to be directed towards the issue of marine safety and oil spill response for Canada's coastlines.

Federal Transport Minister Lisa Raitt was on hand for the announcement, outlining the nature of the Federal Government's 3.7 million dollar contribution to the Clear Seas program, designed to help with the establishment of a Vancouver based Centre and support the initial operations of the new centre.

The program has a mission statement "to be the leading source of credible, fact-based information to bring clarity to decision making for safe and sustainable marine shipping in Canada."

As part of her remarks, Minister Raitt noted the some of the contributions that the Federal Government believes Clear Seas will bring to the discussion on marine safety.

“Clear Seas Centre for Responsible Marine Shipping will make a valuable contribution to the Government’s commitment to protect Canada’s coasts and to strengthen marine safety through the World-Class Tanker Safety System initiative. As an independent body governed by its own board of directors, Clear Seas will provide an important independent voice on Canada’s shipping regime.”

The full account of the Federal Government contribution can be review here.

The Alberta Government will also be providing the same amount of towards funding as the Federal government, with 3.7 million dollars to come from the Alberta Energy ministry.

Also on hand for the Monday announcement were representatives of the Canadian Association of Petroleum Producers, which also contributed 3.7 million dollars towards the initiative, a delivery of funding that some might suggest  could erode some of the "independent" nature of the the program.

The non profit organization was officially launched in 2014 after discussions with Port Authorities, First Nations, Non-Governmental Organizations, coastal communities and other stakeholders that had concerns about marine shipping risks and the need for prevention, preparedness and response strategies along Canada's coastlines.

You can review what is proposed for the program from the overview available on the Clear Seas website here, the program also provides updates on its work through a twitter feed.

The Port of Prince Rupert was quick to salute the new initiative, taking to its twitter feed shortly after the program was announced on Monday. 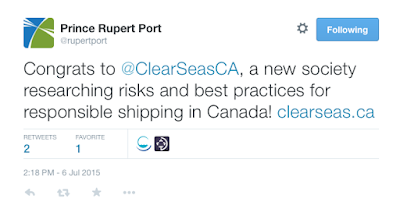 More background on the Clear Seas initiative can be found below