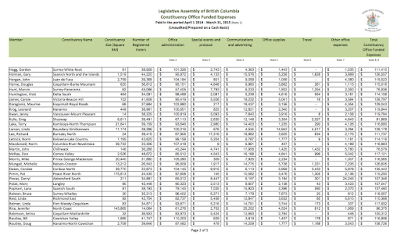 Last week we outlined the latest financial report on MLA expenses from the British Columbia Legislature, a relatively new information review as part of the ongoing process of transparency when it comes to the work of MLA's while in the service of the residents of British Columbia.

Among the notes of interest from last week's report, was a breakdown on compensation, travel expenses and constituency office expenses for MLA's, with our focus from the report dedicated to the passages related to North Coast MLA Jennifer Rice.

From that overview, we found that of the 90,000 or so dollars allocated towards those constituency office expenses, close to 26,000 dollars is dedicated towards advertising and other information options, many of which are providing for some nice cash flow for some of the local media groups around the Northwest.

Two of the region's media companies in particular have found that sharing the word of Ms. Rice's work in Victoria can be a rewarding bit of information delivery, with both CFNR radio and Black Press, publishers of The Northern View and the Haida Gwaii Observer receiving the largest amounts of ad revenue from the constituency office of North Coast MLA.

A review of those payment notes that have been provided as part of the Legislature report on expenses, offers up a glimpse into how and where the advertising has been directed.

The totals of the receipts listed, shows that Black Press received just over 3,600 dollars in advertising revenue through the MLA's office, the majority of that directed to the Coast Mountain News and the Haida Gwaii Observer, with the local weekly the Northern View not appearing to have benefited as much from that adverting flow as its sister publications have.

Radio Station CFNR was the next in the listings when it comes to ad revenues, with radio commercials for the MLA bringing in over 3,200 dollars to the radio chain that covers the majority of Northern British Columbia.

Of the payment notes listed, CJFW was third in line of the local media outlets, receiving only around 370 dollars in revenues according to the items provided to the Legislature review.

Below, you can examine the range of payments to the various service providers from the Legislature documentation that has been listed.

The breakdown of Constituency Office Funded Expenses as seen on the chart at the top of this post, can be reviewed here, Ms. Rice's totals can be found on page two.

The full overview of the report from the Legislature can be found here.

For more items related to the work of North Coast MLA Jennifer Rice in Victoria see our archive page here.