Port Edward Fire Rescue is on the scene of a large fire that has reportedly flared up in the area behind the Kristoff Trucking yard that runs along the road into the District.

The District's Volunteer Department responded to the call late this afternoon, with a unit from the Prince Rupert Fire Department also observed making the trip into Port Edward to lend assistance.

Social media portals for the area began to provide updates on the situation as the smoke began to rise from the scene, a situation that would be of concern owing to the lengthy dry period in the region that could provide the conditions to serve as fuel for the fire.


More information on the situation will be be provided as it becomes available.

A notice on events in the District of Port Edward, posted to twitter outlined the latest from the scene with a portion of the eastern side of the District evacuated with the community Hall serving as a gathering spot. 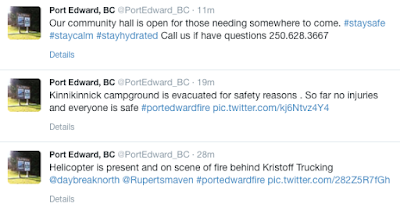 As well, those in the area note that a helicopter had been brought on scene to assist in the efforts to put the fire out.


At 8 PM, the rest of the province learned of the fire situation in Port Edward, as Emergency Info BC, relayed the latest evacuation information through its information streams.

8:40 PM -- Prince Rupert RCMP issue a notice related to the Port Edward Fire, providing more background on the situation which was first reported at 5:50 PM.  The fire grew to 2 hectares by the time Fire personnel had arrived on scene, in addition to local fire departments and forestry crews, the fire is being worked on by helicopter an air tanker has been called in from Kelowna.

“At the moment this is an unfolding event and there is little information that can be released at this time ... What we can tell you is that local fire departments and forestry crews have been engaged. In addition to this a helicopter has been deployed from Terrace, and a air tanker from Kelowna. Fortunately it appears as though the winds are blowing the fire away from populated areas and there is no immediate risk to people or structure.” -- Constable Matt Ericson, Prince Rupert RCMP

The RCMP have advised those travelling through the area to proceed with caution, owing to the growing number of residents along the highway to watch the firefighters work the blaze.

The full media release from the RCMP can be reviewed here.

10:30 PM  The District of Port Edward sounds the all clear for local residents, advising that the fire is now under control and that those evacuated can return to their homes.

The BC Wildfire Service provided an update on the status of the current situation as well, noting that at the height of the fire,  the blaze had grown to six hectares.

As part of the resources being put towards the fire, 20 more members of the BC Wildfire service will be on scene tomorrow, along with an incident commander.

The full update can be reviewed here.

You can find further information on Northwest Emergency responder files from our archive page.