As it turns out, it wasn't you, it was the CityWest infrastructure where the company's Internet service interruption issues of the last week could be found.

Local Internet users in Prince Rupert no doubt have noticed the frequent service interruptions and glacial like speeds of the system over the last five days or so, with the level of complaints registered with CityWest resulting in an apology from the telecommunication company posted to their Facebook page on Thursday afternoon.

As part of that entry, CityWest also announced that the communication service will be providing faster speeds for residents in the months to come. 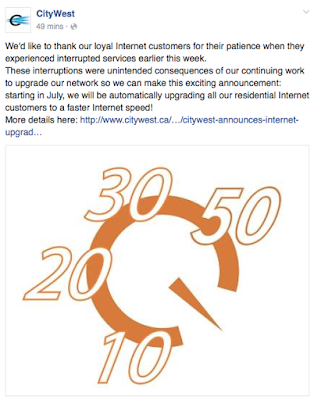 As part of the work on improving Internet service in the Community CityWest has provided some updates on their website, with a late May entry highlighting some of the work that has been taking place and what is to come.

That information note was followed by an update of June 1st, that advisory notes that the CityWest is also planning to upgrade residential Internet customers to a higher Internet speed. That service upgrade is scheduled to take place through July.

More details on the introduction of the new Internet options will be released over the coming weeks, with details to be found on the CityWest website or Facebook page.

Residents with questions or concerns about their service can contact CityWest at 1-800-442.8664

More items related to CityWest and communication developments in the NorthWest can be found on our archive page.
Posted by . at 2:56 PM