Central Coast to see return of summer ferry services in 2018

Residents and visitors to the Central Coast region will see the return of a seasonal ferry service between Port Hardy and Bella Coola in 2018, as the Provincial Government reversed its engines Tuesday on its approach to transportation towards coastal communities.

In a statement from Premier Clark yesterday, the British Columbia Government outlined that the return of service to the Central coast will look different from the service that was eliminated two years ago, which the Premier described as having the wrong ship in place for service to the region.

At the time of the cancellation of the service, it was noted that the service operated in the summer with a thirty percent capacity and featured a schedule that did little to make the region accessible.

When the provincial government decided to change the nature of the service on the Discovery Route it was also outlined how the financial cost of the service was running into the millions of dollars.

However, the change to the nature of access to the Central Coast delivered a serious decline in tourism to the region, something that Tuesday's announcement seems designed to address.

The Premier outlined that the ferry improvements will help to support Aboriginal tourism and to take advantage of the growing number of international visitors that are looking to explore the region.

“British Columbia’s strong, diverse and growing economy gives us the ability to invest in unique tourism opportunities along the mid-coast,”  ...“By introducing the right ferry service, using the right vessel, we can take advantage of the increasing numbers of international visitors who come here to experience one of the world’s jewels – the Great Bear Rainforest.”

The details of the new service and what the vessel that will service it will look like have yet to be finalized, with the Provincial government and BC Ferries set to launch a search for a suitable vessel for the run to be in place in time for the 2018 tourism season. 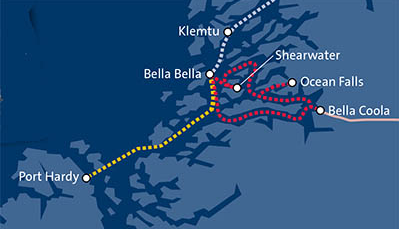 The current BC Ferry that serves the region is the MV Nimpkish which has room for only sixteen cars,  BC Ferries has plans to retire the vessel in 2019.

The full statement on the Provincial Government plan can be found here.

A sample of the Premiers comments is also available through a short video clip of her announcement, which outlined some of the transportation plan for the Central Coast as well as previewing the gathering of First Nations Leaders and Provincial Government officials taking place this week.

The opposition NDP which has long been calling for the government to reconsider its 2014 decision to cut service to the area, took note of Tuesday's announcement and framed it in the prism of the upcoming provincial election.

North Coast MLA Jennifer Rice, who represents the region in the Legislature made use of her social media twitter feed to highlight her thoughts on the provincial government's announcement, 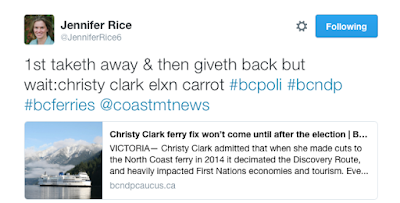 Ms. Rice offered up a short comment and then directed North Coast residents to the NDP's own statement on the new ferry plan from the Provincial Government.

The NDP leader John Horgan taking note of the timing of the announcement, offered up the observation that for the NDP the restoration of ferry service wasn't a case of addressing a mistake but instead more along the lines of making a bad headline disappear.

“This isn’t about Christy Clark doing the right thing and fixing her mistakes, this is about a looming election and trying to quell criticism about her government,”

Improved ferry service to Bella Coola was not the only transportation news outlined by the Premier on Wednesday, Ms. Clark also noted that the provincial government has plans to invest close $200,000 for a new terminal at the Bella Coola Airport to provide more support towards the growth of tourism along the Central Coast.

The province recently completed a 6.2 million dollar project to rehabilitate a lengthy stretch of Highway 20 outside of Bella Coola, as well as another area near Anahim Lake.

More background on BC Ferries related items can be found on our archive page.


Some media notes on Wednesday's announcement can be found below:

Email ThisBlogThis!Share to TwitterShare to FacebookShare to Pinterest
Labels: BC Government to return Central Coast Ferry service for summer of 2018