The summer tourism season is winding down and while the last of the visitors to the North Pacific Cannery Historical site take to the exhibits and boardwalks of the Port Edward facility, change is set to take place in the management ranks at the popular North Coast destination.

A media release from late August has revealed that General Manager Lesley Moore has departed the facility after two years as guardian of North Pacific's historical exhibits, Ms. Moore's contribution and dedication to her work was recognized by Port Edward Historical Society President Bob Payette as part of the announcement of her departure from August 29th.

"We recognize with gratitude Lesley's vigorous efforts in her position and her undeniable passion for northwest BC history. We wish Lesley every success as she writes the next chapter in her storied career with the Canadian heritage sector."

Where that next chapter might be for Ms. Moore wasn't part of the media release, though she clearly had an impact on the success of the historical site during her time on the North Coast.

As part of the announcement, it was noted that guest admissions increased significantly over her two years at the helm of North Pacific, with the site registering a five percent year-over-year increase during the 2016 season to this point.

North Pacific statistics highlight the pull that the historical site has on tourists to the North Coast, as well as with residents of the region, with more than 6,000 visitors taking in the exhibits each summer.

Tours of the facility are provided by a small, but dedicated staff of tour guides, many of them university or high school students who have a strong interest in history and help to bring the exhibits of the past to life for those that visit the site.

Ms. Moore's passion for history and commitment to North Pacific was recently saluted by Shannon Lough of Northern View, who profiled the now former manager of the site as part of the weekly paper's Heart of Our City Series.

The feature article (see here) provides an expansive and informative review of her path to the North Coast and the vision that she had for the historical site.

Despite Ms. Moore's departure from North Pacific before the current season comes to an end, the facility notes that it will continue to operate with regular operations until the official end of the historical site's season on October 1st, which is when the Port Edward facility goes on a fall and winter hiatus.

Other than a note that the North Pacific Board of Directors would launch a recruitment drive for management candidates in due course, no further details as to what that search for a replacement for Ms. Moore might look like was provided as part of this week's outline from the historical site.

The full announcement, which also includes a number of updates on the status of current and future exhibits at North Pacific can be reviewed below (click to enlarge): 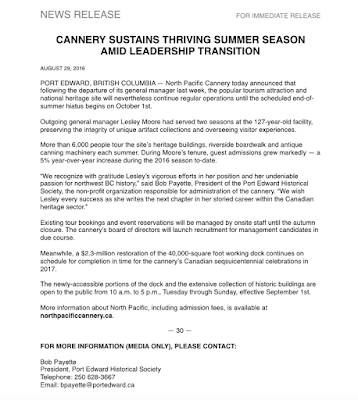 Those looking for more information on what the North Pacific Cannery Historical site has to offer can keep up to date on events through the NPC website.

More background on the North Coast tourism sector can be found from our archive pages here.
Posted by . at 9:32 AM

Email ThisBlogThis!Share to TwitterShare to FacebookShare to Pinterest
Labels: Change in management ahead for North Pacific Cannery Historical Site