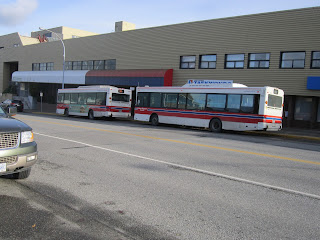 Starting next week BC Transit on the North coast will be extending the hours of operation for bus service in the region to help late night shoppers and holiday celebrants make their rounds.

From December 12 to 17 and again from the 19th to 23rd the Transit system will be operating on the timetable usually found on Friday's ( see here ) with the extended hours running from Monday through Friday in the lead up to Christmas.

They will also be modifying their schedule during the Holiday Season with the following changes to take place:

On New Year's Eve BC Transit and the City of Prince Rupert will be offering Free Transit starting at 6:45 PM and running until 3:30 on local Prince Rupert routes.

Email ThisBlogThis!Share to TwitterShare to FacebookShare to Pinterest
Labels: BC Transit Holiday schedule