While there's been much talk at Prince Rupert City Council of shadow populations and boom times ahead, the reality of the most recent Statistics Canada census is one of a community that continues to have a population that is decreasing.

The government agency released its population count today and Prince Rupert made a top 10 list, though in a category that won't be one of popular review for the Mayor and Council.

The city was listed as one of the 10 lowest centres in population growth between the two census periods of 2011 to 2016,.

From the 2016 count Prince Rupert suffered a decline of 2.3 percent with a population result now listed as 12,220 residents as of the Statistics Canada count of May 2016..

Stats Canada also notes that the larger Skeena-Queen Charlotte Regional District Census Division has declined as well, with the 2016 population listed as 18,133 down 3.5 percent from the 2011 findings of 18,784

You can review the census tables that StatsCanada delivered here.

Further background on the 2016 census will be revealed through the year following this schedule.

The Stats Canada figures offer one positive trend, as they indicate a larger population compared to the numbers delivered by the Province in January of 2016, when BC Stats determined that the city's population as of 2015 was listed at 11,386.

The Stats Canada numbers however run counter to the narrative that the Mayor and Council have been using as their baseline since they conducted a survey on the topic back in 2015.  A process that city officials conducted as part of their planning for major projects.

At that time the city had determined from that process that the city's population had increased significantly pulling the number of 13,766 from the data that was collected, highlighting those findings through an aggressive social media and advertising campaign in April of 2016.

That survey which was part of the city's LNG GO Plan initiative provided for a process of on the street interviews, questionnaires and other head count initiatives held at community events where residents would be offered hot dogs and other incentives towards participation.

A look at how the city delivered that review can be found here.

The city's numbers, compared to those of the official count from Statistics Canada and the findings from the province, would appear to make for a significant difference in how local officials view the state of the city's current population base.

Other than community pride, the main impact of a lower census number as delivered by Stats Canada, is found when it comes to receiving money from other governments for services and other civic uses. Those formula's for funding distribution include a review which is focused on a base population.

While there is some optimism to be found, that as some of the proposed projects for the region come to realization in the years to come, they will bring with them a significant boost to the population for the city.

The fact is, that for Prince Rupert at the moment, when it comes to determining a baseline for future conversation with federal and provincial officials over the short term, that official count will now be listed as 12,220 until the next census period.

Port Edwards Population numbers also indicated a decline, with the latest population findings listed at 467 for the District: 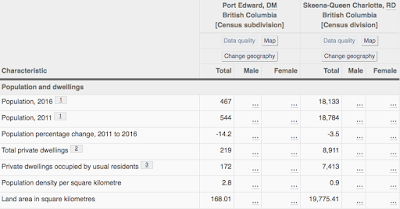 Some of the other Northwest findings from today's population count review include findings for the three other large population centres:

You can explore the findings for other communities in the region here.