The path towards reform of the Canadian Electoral System took a detour last week, as the Liberal Government of Prime Minister Justin Trudeau called off any further review that would change the process in time for the next election cycle of 2019.

And of all the opposition members expressing their outrage at how the Prime Minister has handled the electoral reform file, none was more vociferous on the theme last week than Skeena-BulkleyValley's Nathan Cullen.

With the NDP MP making the most of his time in the House of Commons to make sure that the Prime Minister and the Liberal government were aware of the outrage from the NDP side of the House.

Mr. Cullen has been front and centre to the response since those appearances in the House, and at times with language that would surely make the ancient combatants of Parliament of the late 1800's roar in delight.

With the Skeena-Bulkley Valley MP peppering the Prime Minister with such words as liar, shocking, self serving and cynical (to name a few), over the last five days since the Liberals pulled the curtain down on electoral reform.

Whether it was in the House of Commons, just outside the doors of the Centre block chamber or through any number of media opportunities in the last few days, Mr. Cullen didn't hold back on his thoughts when it comes to Mr. Trudeau and his now disbanded electoral reform committee.

“What Mr. Trudeau proved himself today was to be a liar, was to be of the most cynical variety of politician, saying whatever it takes to get elected, then once elected seeking any excuse, however weak, however absent, to justify that lie to Canadians”

You can review Cullen's dissection of the Liberal Government's ethics from his media conference here.

Taking the lead on the file for the NDP, Mr. Cullen found himself the go to guy for commentary last week, featured in print, radio and television on a number of occasions.

Of course, of all the MP's involved in the six month process, few perhaps put in as much effort as the NDP MP, who  hosted a number of information sessions across the riding and made use of a number of other measures to gauge and at times shape opinion in the region.

When he wasn't in the Northwest he was criss crossing the nation taking the pulse of those who were inclined to participate, while offering up his own views on what he thought was the best way forward for the pursuit of a more effective parliamentary system.

To try and force the Liberals to change their mind and recommit to a review of the electoral process, Mr. Cullen reminded Canadians of an ongoing petition campaign, originally designed to have Canadians send a message to the Prime Minister on the theme of electoral reform.

The MP is now looking to turn that petition into a referendum of sorts on how the Liberals have addressed the issue, urging Canadians to log on in and share their thoughts on the Prime Minister's decision to suspend any change to the electoral process.

An update on the MP's facebook page and twitter feed over the weekend notes that as of Sunday, the number of signatures affixed to the petition has now reached 54,962. 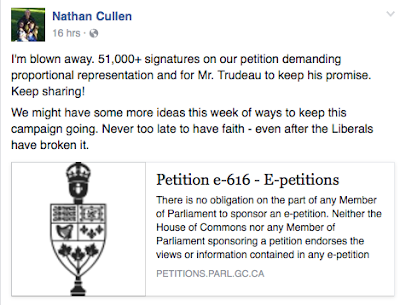 You can review the petition here.

As it stands now however, it would seem that most of  the work of the committee will make for perhaps a few more newspaper and magazine articles, some scholarly reviews on University campuses, or maybe even a book or two at some point in the future.

One thing however seems fairly certain after the last week, the Liberals don't have any plans to put the work of the electoral reform committee into motion as a blue print for reform for the foreseeable future.

Beyond the outrage over a reversal of what many believe was a key element of the Liberal campaign platform of 2015, there is the appearance of the waste of time and waste of money, estimated at $4.1 million and counting that the project delivered.

That may in the end be the only memorable takeaway from the six months of now to be disregarded consultations.

Before they pack up the boxes of testimony and discussion documents and file them off in a dusty corner of a warehouse somewhere far, far from the House of Commons, lets take one last walk along the road to the reform that wasn't to be.

Through the electoral reform committee's work we've been chronicling their efforts and the media review of how the process was moving forward.

The entries have been arriving fast and clearly quite furious since the Prime Minister announced the plan to abandon this current cycle of discussion. You can examine our archive which features entries from the earliest to the most recent here.

Email ThisBlogThis!Share to TwitterShare to FacebookShare to Pinterest
Labels: Electoral Reform plans shut down by Liberals