The application window is now open as Prince Rupert Fire/Rescue looks to fill a position at the city's First Avenue West Fire hall.

The Job Opportunity Notice was posted to the City of Prince Rupert website last week, with a 27 day timeline from start to finish before applications will close on February 28th at 4 PM.

The job notice advises that all applications must be submitted at the City's Human Resources Department and that no applications will be accepted at the Fire Hall.

The position is listed as a part of the Full Time component of the Prince Rupert Fire Department, with no indication provided to outlined as to the starting salary level for the union position.

The terms of the full time salary structure would fall under the current collective agreement between the City and IAAF, Local 559.

As of October of 2016, the staffing level for the Prince Rupert Fire/Rescue Department was listed at twenty firefighters and seven dispatchers.

The full range of qualifications, duties and required tests for the current opening can be reviewed below. 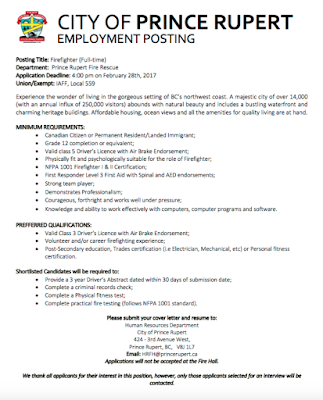 Prince Rupert is not the only Northwest community currently seeking members for their fire department.

As we noted in November, Port Edward is currently in the process of recruiting volunteer members for their department.

A similar recruitment program is taking place in Terrace, with the Terrace Fire Department recently hosted an Open House as that Department seeks to fill a number of volunteer positions with their department.

The Terrace department features a mix of eight full time firefighters augmented by a volunteer core group of 28 to offer fire protection to the community.

More background on civic job opportunities and Labour issues can be found on our archive page here.

More note related to Emergency Services in the Northwest can be found on our Emergency Responder Archive page here.

Update: the City has reduced the number of days for the application period, applications now close on February 15th.