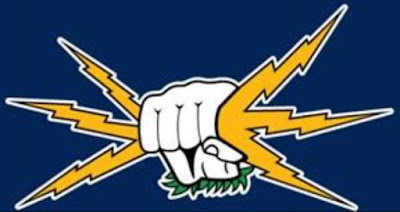 After another strong weekend on the court, the Charles Hays Senior Boys Rainmakers have continued to hold their placement in the Provincial High School basketball rankings for the week.

The AAA listings were released on Wednesday and the Rainmakers are firmly fixed in the middle of the pack of the top ten teams in British Columbia basketball, once again listed in the Number Six position.

Their steady hold on the standings comes after a pair of wins over the DP Todd Condors from Prince George last weekend, match-ups which provided the Rainmakers with victories by scores of 83-68 and 69-47.

For their efforts in Prince Rupert on the weekend, the Condors were awarded an honourable mention in this week's rankings. 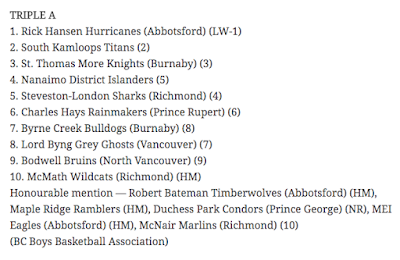 This weekend the Senior Boys are off to Terrace for a pair of games with the Caldenoia Kermodes, a series that marks the end of the regular high school basketball season.

February's path takes the Rainmakers towards the Northwest Zones and the prospect of another trip to Langley for the Provincials, should they prevail in their regional showdown later this month.

With the Provincial tournament just over the horizon, the flow of background material on the High School Basketball scene is starting to increase, thanks mainly to the tireless work of Howard Tsumura and his new online portal Varsity Letters.

As we noted on the blog last week, Tsumura recently left the Vancouver Province and has taken his word processor down the road to Langley, setting up his online presence in association with the Langley Events Centre, which hosts the province's basketball finales every March.

Since migrating to his new venture he has provided a number of profile stories on some of the stories coming out of the Vancouver basketball scene and while there are as of yet no items related to the Northwest, the long time observer of basketball in the province at some point will no doubt turn his attention towards some of the quality ball coming from the North.

For now, consider his work as a scouting sheet for what could be some potential Rainmaker competition should they make a return visit to the provincial finals.

More items of interest on the Rainmaker sports can be found on our archive page here.
Posted by . at 9:28 AM

Email ThisBlogThis!Share to TwitterShare to FacebookShare to Pinterest
Labels: Rainmakers hold at Number 6 in AAA rankings