City in search of new Director of Recreation and Community Services 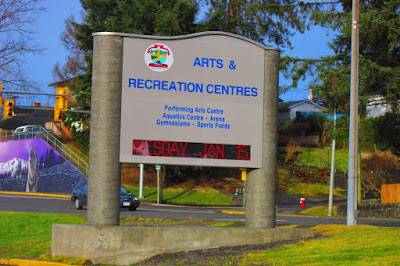 Changes it would seem are afoot at the City's Recreation Department, with the posting of a new Job Opportunity with the City of Prince Rupert putting the Humans Relations department on the search for a new Director of Recreation and Community Services.

The Two page job fact sheet outlines some of the duties and responsibilities that come with the position, a list that covers a wide range of requirements beyond just the management of the City's facilities.

The many tasks for the new Director will cover everything from labour relations and monitoring community service agreements; to preparing grant applications and seeking out further funding opportunities for the city's recreation requirements. 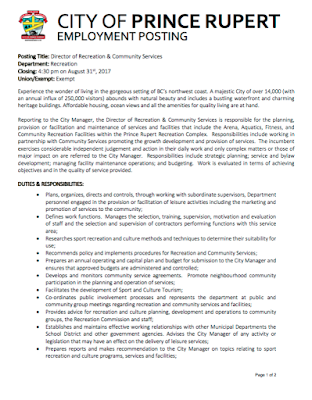 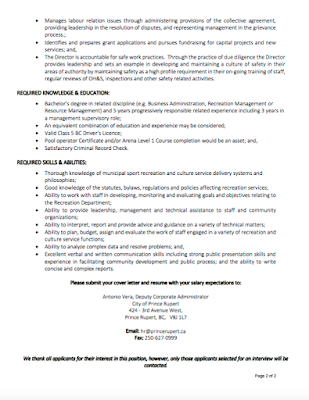 While the City of Prince Rupert website offers up no observations as to the new career arc of Ms. Thorpe, a News Release from July 19th out of Port Alberni offers up some details on the future for the soon to be former Director of Recreation and Community Services.

After what Port Alberni officials describe as an extensive search, Ms. Thorpe appears to be the right fit for their civic staff, she is set to take on the duties of Director of Parks, Recreation and Heritage in the Vancouver Island community on August 28th.

“Willa is highly qualified and is well-respected by her peers ... She brings a wealth of knowledge and expertise to our community, as well as innovative ideas that will add to the richness of our recreational and cultural offerings,” -- Tim Pley, Chief Administrative Officer, City of Port Alberni

The notification to residents of the Vancouver Island city by their municipal government is perhaps an approach towards communication that the City of Prince Rupert might want to make note of.

In recent years, providing for an advisory of the hiring of personnel to advertised positions in Prince Rupert seems to be one area of communication where Prince Rupert City Hall is rather hit and miss at when it comes to transparency.

Since taking on duties at the Recreation Centre in September of 2014, Ms. Thorpe has been the point person for a number of initiatives and changes to procedures at both the Civic Centre and Earl Mah Aquatic Centre complex.

Some of which made for some strong debate and occasional flashes of temper at Council meetings over the last few years.

Ms. Thorpe has also been instrumental in bringing an online a Volunteer Data Base known as the Community Resource Directory to life in the community.

Among the required knowledge for the job, the employment posting notes the following key elements:

An equivalent combination of education and experience may be considered;

Pool operator Certificate and/or Arena Level 1 Course completion would be an asset;

Closing date for the position is August 31st, with resumes to be directed to Antonia Vera, the City's Assistant Corporate Administrator. The Job posting can be found on the City's employment page.

No salary expectation is included in the Job Posting, however the most recent SOFI declaration from the City released in May noted that at three years, the Position of Director of Recreation and Community Services was offering a salary of 110,000 dollars.