Communities on Haida Gwaii seeking feedback from BC ferries users 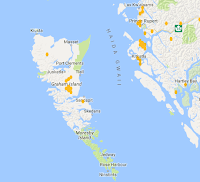 With an eye towards the annual UBCM gathering in late September and the access that it provides to provincial government officials, the communities of Haida Gwaii are looking to take some research with them on the state of ferry service to and from the Islands.

Officials up and down the Islands are looking to the public to share their notes when it comes to issues or concerns that they may have with both the Kwuna and Prince Rupert routes that are offered by the Ferry service.

BC Ferries had previously conducted a customer satisfaction survey last year, making comment cards available on their vessels, however, the response to that initiative was not particularly strong and offered up little in the way of insight to follow up on.

With Ferry service one of the key issues for residents of Haida Gwaii, the municipal officials decided to make the survey process more inclusive, putting their initiative up on the internet and launched in mid July. 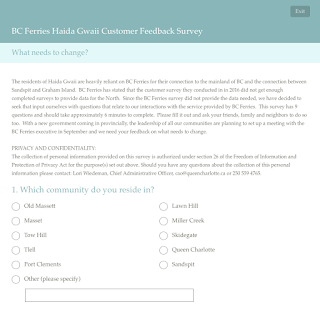 The Haida Gwaii based survey has so far been well received with hundreds of replies delivered so far, the deadline for participation is expected to be set for early September.

That will allow municipal officials to review the data and highlight those areas they wish to raise with the new NDP government in Victoria when they gather at the UBCM convention.

That convention is set to take place in Vancouver from September 25 to 29.

You can review the Haida Gwaii Ferry survey here.

For more items related to BC Ferries see our archive page here.

Further notes from Haida Gwaii can be found on our archive page.
Posted by . at 10:20 AM

Email ThisBlogThis!Share to TwitterShare to FacebookShare to Pinterest
Labels: Haida Gwaii survey on BC Ferries