Inspection of vessel repairs and possible transit approval ahead; as Marine Barge awaits approval to resume journey to Alaska 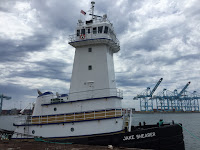 While the risk of any environmental damage related to a marine incident this week near Bella Bella seems to be all but eliminated at this point, the tug Jake Shearer and its cargo of an fuel barge destined for Alaska, still remain in a sheltered area of the Central Coast near Bella Bella.

The most recent update from the Provincial Government's environmental Protection process was delivered on Thursday and made note of recent repairs to cracks that had been discovered in the barge, along with plans for an inspection to determine if the tug and barge will soon be allowed to return to its transit of the British Columbia coast. 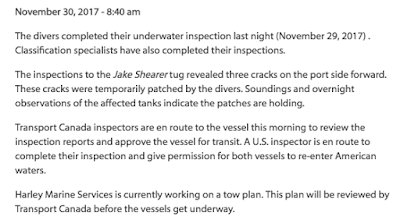 The five days that marked the incident have renewed calls from the Heiltsuk Tribal Council that the Federal Government provide for a local based response program to ensure that the Central Coast and territory of the Heiltsuk is offered as much protection as possible to address just such types of situations that had left the community on edge for much of this week.

Both MP Nathan Cullen and MLA Jennifer Rice, offered up comments related to the incident this week, with Mr. Cullen re-iterating the concerns of the Coastal community as to the need for a proper response program.

You can review some of the past notes of the incident from our archive page here.
Posted by . at 8:57 AM