A familiar face from the Prince Rupert Labour scene now has a new title, as Joy Thorkelson was named President of UFAWU-Unifor after the union with represents workers in the fishing industry hosted their weekend convention in Prince Rupert, an event that was streamed live to union members in the Lower Mainland.

Ms. Thorkelson, who in addition to her work as a member of Prince Rupert City Council, has been the long time Northern Rep for the union and with her election to the top post as of Saturday she takes the reins of the labour organization as the North Coast fishing industry faces a declining workforce and a range of serious challenges to its existence.

The weekend convention was described as one of Revitalization and Rejuvenation for the one time dominant union for the North Coast, with a number of areas up for discussion by delegates over the course of the Saturday convention. 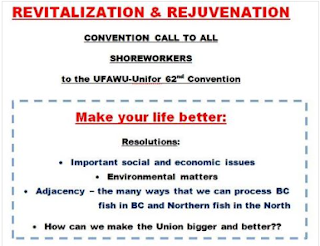 Some of the issues that were featured as part of the gathering at the Fisherman's Hall, included two resolutions of note introduced for discussion, reflecting local concerns and potential investments to improve the local industry.

The call for Adjacency in the Fishery was once again introduced for review, the issue a long running concern over the last few years for the Prince Rupert labour movement, particularly after the Canadian Fish Corporation closed down its canning lines at their facility on the city's east side. 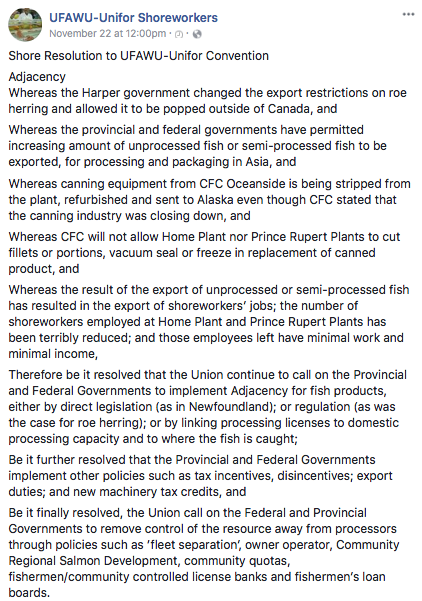 The convention was also asked to consider a call for a local freezer in Prince Rupert, noting how there is no such facility in the community and that the Canadian Fishing Company has no plans to build one.

The resolution also noted how the addition of a freezer facility for Prince Rupert would promote additional on shore work and will allow for fishermen to add value to their catch from the North Coast. 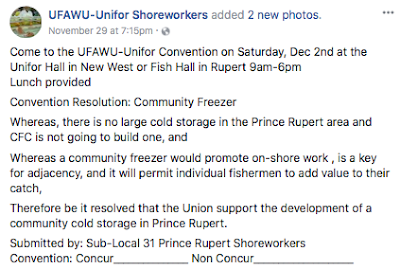 There was no indication from the Union resolution as to how UFAWU-Unifor would see that project funded, or who would be responsible for the construction and operation of such a community facility.

Some background on the weekend convention and other notes related to UFAWU-Unifor can be found from their Facebook page.

You can review more notes related to the fishing industry on the North Coast from our archive page
Posted by . at 9:48 AM

Email ThisBlogThis!Share to TwitterShare to FacebookShare to Pinterest
Labels: Thorkelson to become President of UFAWU Unifor