Not quite gone ... but stepping back a bit! WCC LNG puts pause on Tuck Inlet ambitions

Another of the major LNG projects proposed for the Prince Rupert region is scaling back on its plans for the moment, with the announcement from WCC LNG that they will be closing their Prince Rupert office and putting their plans for a development at Tuck Inlet on much slower timeline for the near future.

The announcement from the company was made last week, with the WCC LNG group noting that they will be in town this week to answer questions, or take comments related to the proposed project.

However, once these current engagement sessions are complete, any future exchanges will have to be done through email, or by telephone as they continue to assess the pace of the project.

Current market conditions and economic uncertainties are cited for the decision, with the company observing that it will be proceeding at a slower pace, with the Prince Rupert offices hosting their final information sessions this week at their First Avenue East, located in the offices of the Hecate Strait Annex building at Mariner's Park.

The WCC LNG offices will be open today and tomorrow from 1 until 4 PM; Wednesday, from 8 AM to 4 PM

The announcement from WCC LNG probably shouldn't be that surprising, Exxon/Mobil/Imperial had telegraphed some of that cautious approach as recently as this fall with the latest update to their newsletter related to the project. 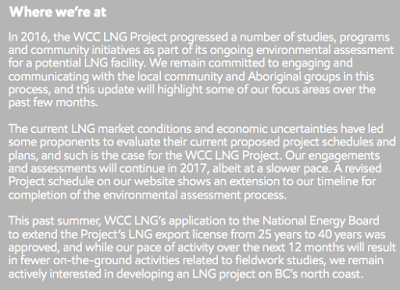 Still word of the office closure and of a slower pace towards the potential development of the project will be a bit disappointing for those in the community that were hoping to see some form of positive news coming from the LNG sector.

Particularly after all the hype that had surrounded the early days of the arrival of the industry leaders in the community and the prospect of a major shift in the industrial footprint for the North Coast.

Other than a few updates from the energy company, we have not heard much from the City or WCC LNG about that relationship between the two groups from the early days of 2014.

At that time City Manager Robert Long delivered a report that offered up a guideline as to the relationship between the City and the energy company and the anticipated employment and economic benefits to the community should the project ever move forward.

The project, like the others of the early days of LNG interest also spawned the city's LNG GO Plan as part of their planning for Major Projects, which was to lay the civic foundation for any potential LNG development in the region.

As for the plans of WCC LNG to slow the pace of their planning for the proposed Tuck Inlet terminal project, the City of Prince Rupert has not provided for any comments through any of their information portals related to the announcement from the global energy giant to this point.

The decision by Exxon/Mobil Imperial to put the WCC LNG proposal on a pause comes after the Aurora LNG, Pacific NorthWest LNG and Prince Rupert LNG projects were all cancelled by their proponents over the course of the last two years.

Contact information for email correspondences or phone inquiries can be found on the WCC LNG website here.

You can review more background on the WCC LNG project here.

While a wider overview of the themes of LNG development from the last few years can be found on our LNG archive.
Posted by . at 10:44 AM

Email ThisBlogThis!Share to TwitterShare to FacebookShare to Pinterest
Labels: WCC LNG slows the pace of its plans for Tuck Inlet LNG Terminal