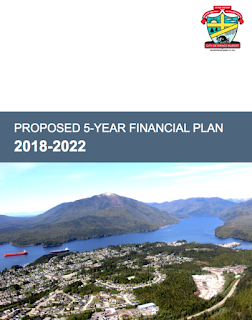 With March the month set aside for public consultation on the 2018 Budget process for the City of Prince Rupert, residents with an interest on the budget blue print and accompanying notes related to the financial review can turn to the City's website for what is a comprehensive presentation on the Finance Department and City Council's talking points.

The City released their Budget Report presentation to the City portal on Friday and the  proposed five year financial plan for 2018-2022 takes the reader through a number of key elements for consideration this year.

As it has in the recent past, the fifty one page document includes some opening remarks from Mayor Lee Brain, City Manager Robert Long and the City's Chief Financial Officer Corinne Bomben.

The Mayor's contribution makes note of how the last four years have been put to use laying the foundation of the future for the City of Prince Rupert, with 2018 called the year where things go "full steam ahead" with Watson Island making for the focal point for much of that future.

In addition to the plan to diversify the economic base for the city, the Mayor makes note of two irritants the city has with the Province.


We also continue to advocate for the elimination or replacement of Provincial incentive program that caps the tax rate for marine export industries, and are paid for by the local taxpayer. Additionally, we are negotiating an agreement via the Northwest Resource Benefits Alliance (RBA), which, if approved, will distribute a share of provincial industrial revenues back to impacted municipalities in the Northwest.

Our job as Council and City staff is to determine how to allocate scarce resources each year via our budget process. This leads to difficult decisions, and many important community priorities that may be unfunded or overlooked due to available funding. It can be difficult to allocate funds to all projects of community interest when the replacement of vital infrastructure such as our 100 year old dam looms large.

This is why a main priority for our Council has been to tackle our revenue challenges, and diversify revenue sources, so that each year we are able to address those challenges head on.

Watson Island also figures large in the City Manager's overview, with Robert Long noting that the issue has been the main priority for him since taking on his position with the City, noting how the municipality now looks to move the former Watson Island pulp mill from that of a liability to an asset.

Now decommissioned, the site no longer represents a liability to the City, but a considerable asset. This year, we signed a lease for a small portion of acreage to Pembina’s small scale propane facility, and we look to cultivate future opportunities in the years to come. Rather than selling the property outright, this strategy represents a longer-term source of lease revenue, rather than just taxation alone. It also means the residents of Prince Rupert will see greater direct benefit from industrial development in our area, and have a say in the type and scale of future development of the island.

Mr. Long also calls attention to the stable labour environment that the city has put in place, that by having signed a  new four year labour agreement in 2017.

As well, the city's top bureaucrat makes note of the growing number of civic administration staff, a group which he describes as that made up of repatriated Rupertities who now make up a vibrant management team.

The City's Financial Officer's preview notes provide for some background on the creation of the Five Year financial plan and the growing focus of the Finance Department on issues of asset management procedures.


A growing part of our job in finance, and as a City, is also the implementation of sound asset management practices. 2017 saw the implementation of the City’s first designated Asset Management Reserve funds for City Utilities. This dedicates a portion of the utility fees collected into a reserve fund strictly earmarked for the replacement of City utility infrastructure.

In the past, infrastructure renewal came out of general reserves and operational budgets—which often meant that emergency repairs would eat into other areas of planned City infrastructure budgets. As it grows, this utility-specific fund will be drawn on to perform planned renewal of City utilities, and provide a more stable budget environment for City Operations.


The main thrust of the 2018 document is outlined as part of the Executive Summary, which highlights the main themes that the City has put a focus on for this year.

The City also identifies six Council priorities for this year

The document also reviews a number of the challenges that the City faces for this year, included on that list were issues related to road maintenance, long term asset management, the ongoing concerns over the Provincial Incentive program and Ridley Island Tax Sharing Agreement.

As well the city's need for a new RCMP detachment was mentioned, with the City indicating that it hopes to divert those funds paid to Port Edward from that Tax Sharing Agreement, suggesting that they be used for the financing of the new City detachment for the RCMP.

As mentioned earlier in this section, the City must build a new RCMP building. Preliminary estimates are that the annual debt cost to Prince Rupert is approximately $700,000 (net of estimated Provincial lease).

With the understanding the local RCMP detachment benefits Port Edward, Prince Rupert, and the outlying communities, Council and staff hope to divert the Ridley Island Tax Sharing agreement funds paid to the District of Port Edward entirely towards the cost of the new RCMP detachment. This would translate into no additional cost to City taxpayers, who currently bear the primary burden of regional service provision.

The need for the City to fund the Airport Ferry is also another area of concern for the City, which suggests that a larger share of that burden should be taken on by a number of the regional partners around the North Coast.

For Revenue projections a pie chart provides the breakdown

While an Expenditure chart highlights where the city spends the revenues it collects.

As part of this years financial plan, at the moment there is no plan to raise the city's mill rate on taxation, with the city set to take advantage of the increased property assessments of January for their financial intake, though the financial office notes that some of those assessment figures may shift when BC Assessments wraps up their review process at the end of March. 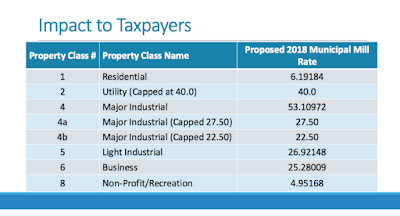 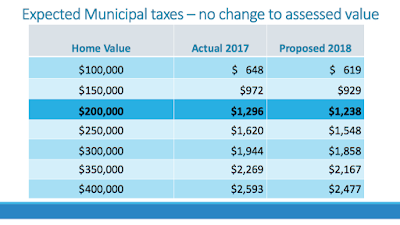 You can find links to both the City's Full Budget Overview and an accompanying slide show presentation available here.

For a look at some of the background from last week's review for City Council members at the Monday council session see our items below:

You can also sit in on Ms. Bomben's presentation to Council from the City's Video Archive page, with her review of last Monday starting at the eight minute mark of the evening's session.


The pair of public engagement sessions for this years Budget will take place as part of the two Regular City Council sessions for March at Prince Rupert City Hall.

The public can weigh in with their comments and observations for Council on March 12 and 26.

You can access more background on the 2018 Budget process from our Budget Archive page here.

Items related to Council Discussion topics can be reviewed here.


To return to the most recent blog posting of the day, click here.
Posted by . at 9:30 AM