The City of Prince Rupert's plans for expropriation of the Watson Island site can apparently now move forward at full speed, that after the British Columbia Supreme Court ruled in favour of the City in its ongoing legal issues with Sunwave, the one time owner of the industrial site.

A court judgment issued on February 23rd, provides some background into the petition by the City of Prince Rupert to seek relief from further claim by Sun Wave, that as they were making their plans for expropriation of the Watson Island site.

The decision reviews previous case law and reinforces some of the previous orders from the legal process related to Watson Island, as well as to explore the areas of note that made for the main elements of the deliberation.

The bad news for SunWave comes at the end of the judgment, where Justice Affleck lays out the final conclusions from his decision.

The respondent Sun Wave also submits that there is either no evidence or insufficient evidence on which to grant the relief requested by the petitioner. In particular, the respondent submits that, for the purposes of s. 20(4) of the Act, there is no evidence that the petitioner is “in doubt” about the nature of any ownership of the lands to be expropriated and the extent of any interest of an owner.

As I previously noted, I have found that there has been no application pursuant to s. 20(4). As such, no determination of ownership interests need be made. In the alternative, if an application pursuant to s. 20(4) was before me, I would elect not to make a finding as I was not presented with evidence sufficient to determine such interests. I would also rely on the permissive language in s. 20(6) to decline to make an order on such an application.

My conclusion is that the petitioner has complied with the obligations imposed by the scheme as described in Van Kam and Dales and is entitled to the order it seeks.

I will leave the question of the amounts that ought to be paid out as contemplated by the order of Russell J. of February 17, 2016 to the parties to address. If there is disagreement, there will be a reference to the registrar. [

I need not address the alternative relief sought by the petitioner.

The petitioner is entitled to the order it seeks in accordance with these reasons and to its costs on Scale B.

You can review the court's full decision announcement here.

Somewhat surprisingly, as of this morning, the City had not issued any official comment on the outcome of the court case.

With no observations on the judicial decision relayed to this point by way of either the city's website, Facebook portal or the Mayor's own political Facebook page where he often shares items of note related to city business.

Now that the path is clear for the Municipality to move forward with their plans, one might imagine that many residents will be hoping that this makes for the final appearance of the many ghosts of the past for Watson Island.

The process of expropriation of the land began in July with a report from City Manager Robert Long, and picked up steam in August as part of a Special Council session, with Council members offering up little in the way of questions  at the time of the City's Financial officer's background notes related to the recommended course ahead. 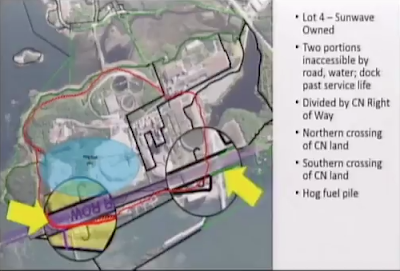 City Council outlined its ambitious plans for the industrial site last December, when they announced the launch of their plans for the Watson Island Intermodal Trade and Logistics Park.

The recent Budget presentation package now available for review on the city's website indicates that the planning to turn the once moribund pulp mill into a leasing opportunity in the world of logistics, has been the main focus for the City Manager over the last few years.

As part of his contribution to the Financial plan document for 2018, the Watson Island story made for a good portion of Robert Long's message to the community.

The main takeaway from the Watson review is that of the decision of the city to shift direction from its previous goal of selling the property, to now becoming the landlord for the site made for the key element of his correspondence.

Now decommissioned, the site no longer represents a liability to the City, but a considerable asset. This year, we signed a lease for a small portion of acreage to Pembina’s small scale propane facility, and we look to cultivate future opportunities in the years to come.

Rather than selling the property outright, this strategy represents a longer-term source of lease revenue, rather than just taxation alone. It also means the residents of Prince Rupert will see greater direct benefit from industrial development in our area, and have a say in the type and scale of future development of the island.

Much of the discussion on the shift in focus for the city from that of tax collection, to potential rent collection came out of a number of closed council sessions last year.

With the only indication for the public of the City's new plans for the Island not revealed until after the Council members had apparently made their decision.

So far, only one industrial player has been identified and expressed interest in the Watson Island Logistics Park, with Pembina Resources outlining their plans last fall for a Liquid Propane Export terminal at the site last fall.

That terminal project remains in the planning stage at the moment, the last mention of the project coming in February as part of Pembina's financial report, which observed.

You can review some of the past history of the Watson Island legal trail from our archive page here.

Notes on the Watson Island Trade and Logistics Park can be explored here, while updates to the Pembina plans for Watson Island are available on our Pembina Archive page.


To return to the most recent blog posting of the day, click here.
Posted by . at 10:32 AM

Email ThisBlogThis!Share to TwitterShare to FacebookShare to Pinterest
Labels: Judgement on file between City of Prince Rupert and SunWave