British Columbia's version of March Madness will kick off this Wednesday, as the Langley Events Centre plays host to four divisions of High School Basketball provincials and for the Charles Hays Rainmakers, the opening day tip off on Wednesday will have them taking on RC Palmer a lower mainland team from Richmond, with a 5:15 PM tip off.

The Makers, who have been pegged as the number four seed at the BC Provincials discovered their fate for opening day of the tournament, with the match up noted as part of the Provincials Draw Showcase Show on Sunday.

The province wide stream cast, was aired at 3:30 on Sunday and set up the four tournaments that will deliver British Columbia's Senior Boys champions for 2018.

Hosts Howard Tsumura and Chris Kennedy  provided for some insight into what to expect from the tournament, making for a handy scouting guide for fans of the Rainmakers to check out to see what the road ahead in Langley looks like for the Charles Hays squad.

With a shout out to work ethic of the Rainmakers and the long tenure of their head coach Mel Bishop, the pair noted that the Rainmakers had already been tested against some of the powerhouse squads of the Lower Mainland, that through some tournament appearances during the winter season.

The Rainmaker record of 18 and 2 on the year, including wins over GW Graham and Duchess Park and a one point loss to the 4A powerhouse Kitsilano has impressed tournament observers and gained special mention as part of the Sunday stream cast.

Both Kennedy and Tsumura also noted that the Senior Boys will coming south to play for the Junior squad, noting how Kevin Sawka's team had qualified for the Junior tournament but could not attend it owing to the travel woes of late February.

The AA Tournament website is available for review here.

Notes on the event can also be explored through the AA Tournament twitter feed.

Rainmaker fans can subscribe to the stream cast for the Provincials through the Stretch Internet Pay Portal service, the Pay Per View broadcast of games costs 8.50 per day or $24 for the full tournament pass.

The schedule for the week is available here, you can sign in or register from the links found on the top right hand side of the page


You can watch the full Tournament preview presentation show from the Langley Events Centre stream cast here. (note that it takes a few minutes to load) 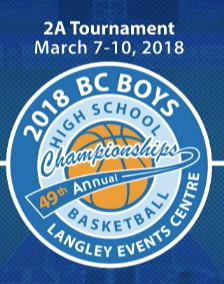 In addition to the video preview, Howard Tsumura hosts the Varsity Letters Blog, it provides the most comprehensive coverage the province's High School and University/College sports scene, his work on the BC High School Provincials in the past has been the bench mark for coverage of the event.

His items related to this years tournament should make for about as good a preview of the week ahead as you are likely to find.

You can find his work here.

Two other teams from the Northwest will be in Langley this week as well, taking part in the Single A and Triple A tournaments.

The team from Bulkley Valley Christian will be making another return to the Single A bracket with their first game set for  3:30 PM on Wednesday against St. Andrews . 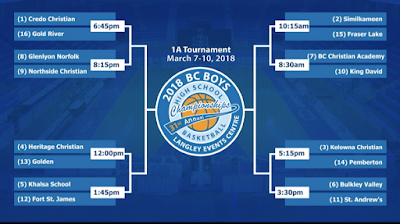 In the Triple A bracket, the Caledonia Kermodes head into tournament week listed as the number 16 seed, that means that they have the biggest challenge for Day One, as they are matched up with the number one team from Byrne Creek.

The Burnaby squad is considered the team to beat in the highly competitive AAA bracket, having taken on and finding success against a number of Quad A teams through the year.

The Kermodes will look to spoil that narrative with a 3:30 PM tip off Wednesday. 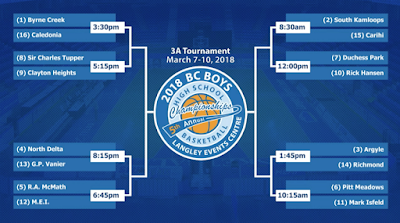 We'll have more items of note related to the Rainmakers trip to Provincials as we get closer to Wednesday's ice breaker game of the four day tourney.

You can find our notes as part of our Rainmaker's Archive page here.

To keep up to speed on what the Senior Boys are up to in Langley follow the CHSS Twitter feed which provides frequent updates on all of the school's sports teams, as well as other events of note from the school on Prince Rupert Boulevard.


To return to the most recent blog posting of the day, click here.
Posted by . at 9:56 AM