After a few delays to the original plan, this weekend will find a group of volunteers taking to the old ball field at the corner of McKay and Kootenay to begin the first phase of what they, hope will one day be an urban oasis on the west side of the city.

The McKay Street Park project Build Day arrives this Saturday and with a strong response to the call for volunteers the work will get underway bright and early Saturday morning at 8 AM, with hopes of having the work completed by 5 PM.

Volunteers will also watch over the construction site through the evening period, to allow for the cement to settle properly and to make sure the project is secure.

The first phase of the project, the children's playground moves closer to completion following the success of Transition Prince Rupert in the BCAA Play Here competition last year, which saw the Prince Rupert project win 100,000 dollars towards the construction of the equipment that will make for the new play area.

In addition to that large sum contribution to the project, the McKay Street plans have moved forward thanks to additional support whether financial or in kind, by a number of community partners.

The original build day of last month was moved back a month owing to the cold temperatures of the time. The most recent update provided this week from Veronika Stewart of Transition Prince Rupert sets Saturday as the new day for the volunteers to assemble. 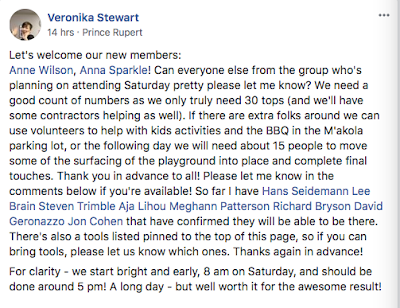 Once the park is in place, all that will stand in the way of the youngsters of Kootenay/McKay from taking to the new play options will be an inspection by the City of Prince Rupert, something expected to happen on Monday.

Following the inspection process, the park will be open for use, hopefully later that same day on the 9th.

The next stage of the redevelopment of the old ball park, is the introduction of a linear dog walk, which is expected to take place sometime towards the fall, providing funding for the plan can be raised towards the initiative.

The City made note of the dog park feature for the McKay Street area last month, that after they closed the un-official dog walk that had taken over the city's Doug Kerr Field at the Civic Centre.


The project has taken a three year process from the time it was first introduced in the Spring of 2015, to the work to come of this weekend, below are some notes when it comes to the McKay Street Plans along the way:


There is a dedicated Facebook page for the project which you can review here.

More information on Transition Prince Rupert can also be found from the organizations website and Facebook page.

For more community notes from around the North Coast see our archive page here.