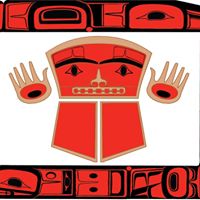 When it comes to the prospect of change to the make up of the Lax Kw'alaams Council, members of the community who took a recent survey hosted by the Band Council have suggested a Council with one Mayor and Six Council members may be the best path forward.

That finding from the survey, delivers a recommendation which would make for a significant reduction from the  listings for the current roster of officials which is in place at the First Nations Community North of Prince Rupert.

The Council composition topic was one of a number of findings from the results of a Membership Survey held this year, with the details released March 15th, coming after the conclusion of community meetings on themes of governance.

Among some of the other questions that provided some strong numbers and guidance from the members for the Survey conducted by Hans and Suhr Associates of Prince George were:

(101) members spoke out against the idea that Band or Band owned entities should be allowed to hire councillors as employees or independent contractors.

While (78) believe that the majority of band councillors should live on reserve, (43) stated that it didn't need to be a requirement, while (22) were somewhat undecided on the issue.

The question of whether proxy voting should be permitted in elections was close, but those against the idea (47) were more numerous than those in favour (33) though there were some strong opinions that elders, or those facing an emergency be allowed some leeway on the proxy issue.

All but one of the (136) who provided a response believe that there is a need for a mechanism for Mayor/Council to discipline Council members for failure to abide  by the Council code of Conduct or Oath of office.

Those that may consider a run for office in Lax Kw'alaams should take note of three areas where a strong response was delivered on themes of requirements for Council nominations.

(93) believed it important that a valid and recent Criminal Record Check be in place, (60) believe that a letter from the Band stating that the Candidate is not in arrears to the Band is important, while (68) endorsed the idea of a statement confirming that the Candidate has not engaged in any legal action against a band member or the band.

You can review the full survey and responses here.

A look at the Election Code Information Sessions presentation can be examined here.

The work on the election code was taken on in response to events from 2014, with residents seeking to address some technicalities within the 2011 Election Code (see here) and the complaints process related to the code.

The Lax Kw'alaam government continues to gather input and feedback from the membership on the project and from that will continue work towards changes to the code.

As the Lax Kw'alaams Band outlines through this information statement the plan is to submit a Draft Revision for the membership's review and approval once they have taken in as much feedback as possible.

The next round of Election Code Meetings is set for April 16, 17 and 18 as outlined below, attendance is open to those who are members of the Lax Kw'alaams community. 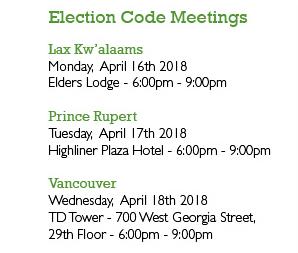 More background on developments at Lax Kw'alaams can be found from the Band website and Facebook page.

You can also access notes of interest about the community from our archive page here.


To return to the most recent blog posting of the day, click here.
Posted by . at 9:15 AM