Coast Guard Rescue three off fishing vessel sinking near Triple Island; Transport one other to hospital


Three crew members of the Western Commander were rescued this morning following an incident near Triple Island in waters off of Prince Rupert.

The first alarm to the Joint Rescue Coordination Centre came in this morning, with the Centre which is based in Victoria dispatching three coast guard vessels and a volunteer vessel from the Prince Rupert based Royal Canadian Marine Search and Rescue Station 64 to the scene.

Upon arrival, those responding units found the 72 foot vessel taking on water; as well as one member of the crew suffering a medical emergency.

The stricken crew member was taken to Prince Rupert for medical attention.

The remaining  two crew members returned to Prince Rupert aboard the Cape Dawson, arriving back in port in the mid afternoon period.

The Coast Guard Vessel Cape Dawson and Royal Canadian Navy Search And Rescue assisted in the work to bring the crew members to safety.

In a short note posted to the Canadian Coast Guard twitter account, an update on the situation noted that the Coast Guard Vessel CCGS Tanu was currently on the scene with environmental response crews in attendance, no pollution has been been observed from the sinking to this point. 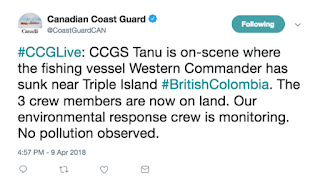 We will update this story as more details become available.

Update: Sad news to relay related to Monday's rescue work off of Triple Island, one of the crew members of the vessel  Clyde Dudoward passed away after suffering an apparent heart attack during the incident.  Mr Dudoward had an extensive history in the fishing industry on the North Coast and leaves behind a large number of family, friends and co workers in his passing.

As an additional note on the rescue work of Monday, the remaining crew, three into total were returned aboard a Coast Guard vessel in the afternoon, that corrects our original number of three crew members in total aboard the Western Commander.

As the week moved forward, reports of some pollution in the water related to the sinking had been reported, with the Coast Guard addressing the issue.

More items of note related to the work of Emeregency Responders on the North Coast can be found on our archive page.


To return to the most recent blog posting of the day, click here.
Posted by . at 5:15 PM