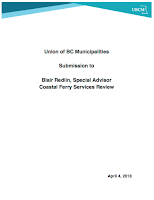 The Union of British Columbia Municipalities, the umbrella group for municipal government in the province, has spoken out on behalf of its membership on issues related to the BC Ferries review that is currently underway by the provincial government.

In a document submitted earlier this week, the UBCM highlighted a number of areas of concern for municipalities that are served by the Coastal Ferry Service and offered up a number of suggestions to improve the dialogue between BC Ferries and those communities that it operates in.

The range of topics explored by the UBCM included ferry fares, service levels, long term planning, fleet development and other issues related to ferry operations and communication with local governments and stakeholders.

Among the areas where the UBCM calls for further action, three key elements stand out:


UBCM also made note of some of the concerns from its Northern membership which have expressed some frustration with current levels of service to the region.

Some ferry dependent communities also have a high proportion of Indigenous residents and an emerging Indigenous tourism sector, which is constrained by service levels. This is particularly true for the North Island, Central Coast, and North Coast of BC – including Haida Gwaii.

The theme of a need for an extended peak season and an overall impression of a shortage of service also made for some of the talking points from the North Coast and Haida Gwaii.

Towards that situation, the UBCM report outlines how BC Ferries needs to address service shortfalls, particularly as it impacts on tourism in the province.

In order to fully capitalize on the tourism and economic development opportunity that has resulted from the reduction and stabilization of fares, consideration needs to be given to increasing service levels, as identified, to ensure coastal communities are able to obtain the full benefits.

Among the key items on the recommendations list from UBCM:

Integrating and coordinating ferry service with other modes of transportation, especially on the minor routes where other transportation options are limited but essential to travellers.

UBCM also observed of the need for the Government of British Columbia to work with local government representatives, in order to identify ways to improve engagement and communication with local officials.

To conclude their report the UBCM document offered up three streams for follow up by the province and Ferry Service when it comes to their relationship with local governments.

Recognize the coastal ferry system as an extension of the highway system and administer, fund and manage it, accordingly. UBCM is interested to learn what the Province means now that it has acknowledged that BC Ferries is part of our highway system.

Identify and formalize communication and consultation mechanisms between local governments and other key stakeholders (FACs, BC Ferries, Commissioner and MOTH) to ensure that local governments can provide input and feedback prior to decisions being made that will affect ferry operations.

You can read the complete submission from the UBCM here.

The review, which is being conducted by Mr. Blair Redlin, a special advisor to the Minister of Transportation and Infrastructure is expected be completed later this Spring, with a report on the results of his review to be delivered to the Minster by the end of June.

The province announced Mr. Redlin's review in mid December of last year, outlining what his focus would be as he works towards his June 30th deadline.

For more items related to BC Ferries service on the North Coast and Haida Gwaii see our archive page here.

To return to the most recent blog posting of the day, click here.
Posted by . at 9:20 AM

Email ThisBlogThis!Share to TwitterShare to FacebookShare to Pinterest
Labels: UBCM report for BC Ferry Review