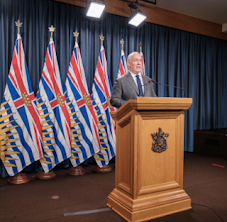 The proclamations of "expect something big this week" from the political punditry in Victoria came frequently over the weekend; spurred on by what became an avalanche of spending announcements by the NDP government which started spreading glad tidings of upcoming spending on Friday and continued through to Sunday.

Friday the province shared some of its good news on a range of initiatives with 25 announcements.

Saturday delivered another six advisories on some spending plans and program announcements.

While Sunday set the table for Monday morning with updates on spending plans and other notes  totalling 17.

From spending on highway projects, to housing to supports for education and health, the roll out of announcements made for an evolving campaign platform that could showcase the achievements that the NDP wish to make note of, while preparing the blue print of the promises to come, many of them destined for ridings where the governing party may hope to be making political inroads.

The unusual flurry of spending themes is leading to much speculation that Premier John Horgan will be looking to take British Columbians to the polls this fall with an election call today.

The prospect of a potential election call has certainly not been muted by the stream of nomination announcements of late, as well as with announcements from seven current cabinet ministers highlighting their plans to step aside at the next call.

Among those Cabinet Ministers who have announced a farewell at the next vote are:

The unusually high number of cabinet ministers publicly announcing their plans to depart politics indicates a bit of third year weariness for his circle, which perhaps and more importantly would seem to be propelling the Premier into the decision to send British Columbians to the polls.

The speculation of the potential election has also seen a number of high profile NDPers make their intentions known on their desire to take up the torch should the writ be dropped, with two Federal NDP members in Murray Rankin and Nathan Cullen also seeking nominations.

Other than political opportunism and expediency, along with the quest for a majority mandate for a four year term, it's not really clear why the Premier believes that taking British Columbians to the polls is a must in the midst of a pandemic, that after highlighting how we all must do our share to remain focused on COVID and the measures in place to address it.

With the province having adopted a fixed date for votes, Elections BC notes that the next scheduled date for a provincial election would be Saturday, October 16th, 2021 offering up an other year for good governance if desired.

And while his government holds office thanks to their confidence of supply agreement with the Greens, there to this point has been no indication that the Green Party, which recently elected a new leader in Sonia Furstenau is chomping at the bit to bring down the Premier and hit the political hustings.

Still the speculation has been at a fever pitch for much of the weekend, with those who cover the Legislature from Victoria on their social media platforms almost as frequently as the government distributed their latest spending announcement, many of them suggesting that today will be Decision Day for the Premier setting the course to the polls.

If the political entrails so far are correct, we will find out later today and the candidates could very well be off to the races.

Already, the lineup cards are starting to be created in ridings along the highway sixteen corridor, you can review who is in the race so far, if it becomes a race ...  from our archive page here.

You can review some of the political chatter from the weekend through our political blog D'Arcy McGee.