Death Threats for Dr. Henry, an unacceptable intrusion on civility!

Some disturbing revelations for British Columbians came out of yesterday's opening session of the UBCM convention, a virtual event this year, which for Day one featured a speakers panel of three high profile women in the province.

Their topic one to address these challenging times and to share their reflections on leadership and the ability to work together towards solutions. 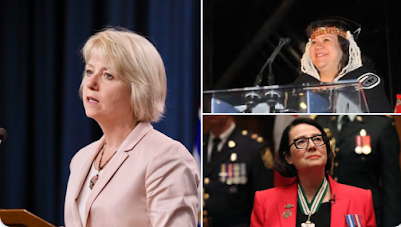 Dr. Bonnie Henry joined Lieutenant Governor Janet Austin and Kim Baird the former Chief of the Tsawwassen First Nation, the trio speaking to the theme of reimagining leadership lessons from the Pandemic.

Their commentary moderated by UBCM President and Sooke Mayor Maja Tait provided some insight into how they viewed leadership during times such as ours, their themes of the need for collaboration finding a receptive audience.

Through their commentary, the panelists provided encouragement for local government and other community leaders to balance competency and evidence-based information with empathy and a genuine desire to listen.

However, when it comes to a show stopping moment, Dr. Henry had the full attention of those delegates viewing online with her comments on how the current COVID-19 pandemic has resulted in significant threats towards her and her staff as they continue to address the pandemic.

“There are many people who don’t like what I do, don’t like the way I say it, don’t like my shoes, and feel quite able to send me nasty notes, to leave phone calls, to harass my office staff. I’ve had to have security in my house, I’ve had death threats – how do we deal with that? I sense people think it is ok to do that with a woman who is ‘up front’.”

The concept that anyone would direct death threats against the woman who has been the calming influence for us all during the pandemic is an outrageous revelation and one which demands extensive investigation and charges to follow.

Once word spread over the Doctor's observations, the province's media groups did a little digging and surprisingly discovered that despite having as prominent a position as one might get in the midst of a pandemic, Dr. Henry seemingly does not meet the threshold for the kind of protection level afforded to politicians or others deemed as having a high profile.

Something that clearly should be addressed  ... as they say yesterday ...

Considering the value of her work and the concerning times we live in, the province should immediately step in to ensure that she and her staff can proceed on with their work without fear of danger, threat or harm.

The investigation into the threats is currently the domain of the Victoria City Police, British Columbians can only hope that they are thorough and quick with their work and that arrests are made towards those who clearly are not part of a civil society.

Whoever is behind the disgusting intrusion into the lives of Dr. Henry and her staff are clearly not understanding that the issues at stake for all of us are larger than their personal grievances or differences on how the province approaches its response to the virus.

The Doctor's partner at the podium until the call of the provincial election was Health Minister Adrian Dix and last night, through his twitter feed, Mr. Dix spoke for the vast majority of British Columbia residents.

These are indeed times not often seen that put us to the test, but clearly, in some instances, some of us are failing that test.

Dr. Henry and all others that work on our behalf in high profile and challenging situations need to be assured that British Columbians have their backs.

Some of the response to the revelations of the death threats can be found from the media review that has followed yesterday's UBCM session.

More from the UBCM convention can be explored through our UBCM page here.

You can follow her daily announcements on COVID from our archive page here, a wider overview of the Victoria political scene is found from our political blog D'Arcy McGee.