Residents of the Nisga'a Nation are scheduled to go to the voting booth in November, but if a growing number of the respondents to an online petition find success, that voting day may be delayed for up to a year, that as the petitioners look to have a number of concerns addressed.

The petition which is posted to the change.org website is calling for a Special Investigation, Forensic Audit and other measures, all related to an email controversy from May of 2019.

Sixteen demands accompany the petition document which you can review here, so far over 550 people have signed the petition.

The investigation into the email situation which has spurred on the petition,  resulted in a declaration of no merit back in March from an Independent Investigator.

The petition also takes note of some recent court action related to the issues, observing that the Nisga'a  Lisims Government is in the midst of appealing to the BC Supreme Court.

This court case shows us the process of the investigation was flawed. In fact Nisga’a Lisims Government did a Media Release making reference to “No Merit to Allegations” then in the last two paragraphs stated that the investigation did provide recommendations for changes in Nisga’a Lisims Government Administration processes. -- From the online petition hosted by change.org.
The Nisga'a Lisims Government has not provided for any public comment relatedto the petition since it was introduced, it does however have two days of a Special Sitting of the Wilp Si'ayuukhl Nisga'a set for next Tuesday and Thursday. 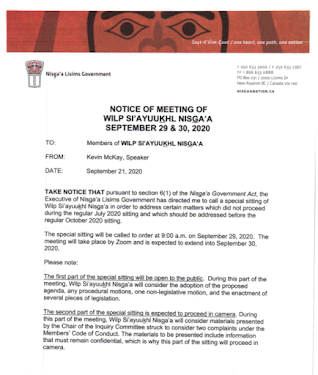 The meeting which will take place by Zoom will feature two parts, the first will be the special sitting open to the public, the second portion of the two day session is to be conducted in camera.
Further notes on that session can be explored here.
A wider overview of past items of note from the Nisga'a is available here.