While Premier John Horgan continues to bang out a symphony on the election speculation drum kit, one of his MLA's and Cabinet Ministers in the North is making plans to exit stage left, with Stikine's Doug Donaldson announcing on Monday that he will be stepping out of the political spotlight whenever that next election call comes. 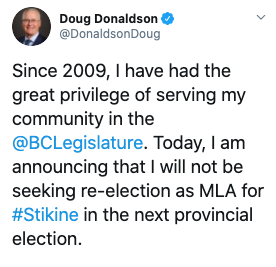 Mr. Donaldson, who has been Mr.  Horgan's Minister for Forests, Lands Natural Resource Operations and Rural Development,  expanded on his decision through a statement posted to the NDP caucus website on Monday, noting of his twelve years of service as MLA for Stikine, that after shifting from municipal politics where he had served as a councillor in Hazelton for a decade.

As part of his farewell announcement, he reflected on themes of First Nation engagement and what has been accomplished to date and what remains to be done.

“One of my main motivations for running in provincial politics was to address grassroots struggles faced by northern, rural residents of Stikine that are linked to government policies and institutional biases. I vowed to work from the inside as your MLA to do that. I believe there have been successes and recognize there is much more to be done. For instance, the work on aboriginal title embodied by passing the groundbreaking Declaration on the Rights of Indigenous Peoples Act and the Wet’suwet’en MOU has just begun."

Mr. Donaldson also paid tribute to his leader John Horgan and the opportunity that he offered him as a Cabinet Minister and key contact point for the North to the Horgan government.

“I’m also very appreciative to Premier John Horgan for his strong leadership, and have been honoured to serve as Minister of Forests, Lands, Natural Resource Operations and Rural Development. In my history, I was on the path to a career as a biologist and I have spent most of my life in BC living in rural communities of under 500 people. So with that background, it is really a dream portfolio where the fact that we are part of the ecosystems in which we live, not apart from them, is constantly reinforced."

His time in that position did prove controversial however, with many of the current forestry issues flaring up during his time at the helm of the post, with the reviews not always favourable when it came to how he addressed a range of concerns.

Mr. Donaldson also received some criticism  during the time of the Wet'suwet'en blockades earlier this year, that after he appeared at a checkpoint Southwest of Houston at the height of tensions  in the region, that as RCMP members began enforcement of court order to remove the blockade.

As the tributes continue to arrive to his Facebook posting of Monday, his time served as MLA was hailed by a number of Northwestern politicians, including North Coast MLA Jennifer Rice and former Skeena-Bulklley Valley MP Nathan Cullen who offered up their thoughts on his announcement of the day.

The salute from Mr. Cullen makes for an interesting one, with some speculation now percolating in the Bulkley Valley, that Mr. Cullen will make a shift towards the provincial scene and may seek the nomination for the Stikine seat should an election call come in the upcoming days.

More on Mr. Donaldson's announcement can be explored below:

A wider look at the provincial scene and that speculation over a potential election can be found from our political blog D'Arcy McGee.