City's water issue may be along the lines of Don't Ask, Don't Tell for City Council ... but for some residents questions remain

It's been one month now that Prince Rupert residents have been under a Water Advisory, that the result of our mid August deluge of near record proportions.

An extreme weather event that once again stirred up the turbidity of Shawatlans Lake and required the advisory to Boil Water for a number of residents including children, pregnant women, the elderly and persons with weakened immune systems, a collective one imagines that takes in a fair bit of the population.

Since the additional recommendation courtesy of Northern Health, the City has provided for three very brief updates, each of which have stated that while some improvement had been noted, the situation is still as it was on August 17th.

The most recent update issued late today on the City website, provides for much the same story, noting how the City’s Water Quality Advisory remains in effect over the weekend and until further notice, due to continued turbidity levels that are slightly higher than acceptable limits.

Such has been the lack of regular information on the ongoing situation that it has solicited a few questions from the public on the City's Social Media platform, with some residents expressing their frustration at the situation and communication gaps.

In response, the City's Communications Manger Veronika Stewart offered up the following reply on September 15th: 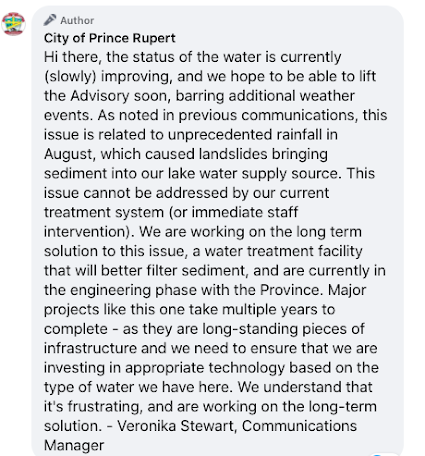 The City's Council members have for the most part managed to ignore the ongoing water woes for residents since the original incident of Mid August, letting both the August and September public sessions go by without a mention of the topic from either the Mayor or the elected members of Council.

The September meeting, one which lasted only fourteen minutes offered up an opportunity for some commentary and explanation, but it seemingly did not make it to the Mayor's notes on the night, nor  for comment or inquiry from Council.

The topic doesn't seem to have resonated much with local media either, a regional collective which have offered few updates, or asked little in the way of quesitons of the City since the original advisory was issued.

And while the City states that the situation seemingly can't be addressed until the large scale infrastructure concerns are knocked off the to do list, the need to at least keep the public informed and explore potential solutions remains.

City residents, particularly the elderly and those on fixed incomes and not able to take advantage of such luxuries as a filtered watered system for their homes, probably would like to know if their elected officials might be able to come up with a work around for them

Particularly now that it appears to be a long lasting and ongoing problem.

Beyond that, perhaps offering up more frequent and informative updates, as well as some documentation on the testing process may at least make them feel that their concerns are being heard.

You can follow the latest notes on this most recent bout of Water woes from our archive page here.

More notes on Council Discussion themes can be reviewed here.