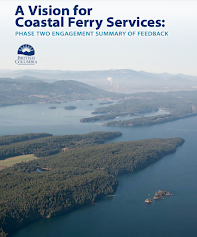 Following a spring and summer of consultation, Transportation Minister Claire Trevena has relayed some of the views of British Columbians when it comes to the Ferry service of the future.

In what has been a busy week of information releases for the John Horgan government, the focus on ferries was relayed on Thursday, with the Minister making note that the views held by the public also were shared by the Provincial government.

“What we heard from the public is that while the current ferry service works well for some, there’s lots of room for improvement for those who most depend on it – those who live in ferry-dependent communities. Our vision is that travel by coastal ferries is seamless, equitable and compatible with the needs of coastal communities and our natural environment. These may sound like basic principles for any transportation service, but these are all areas where we’ve heard improvements need to be made.” -- Claire Trevena, Minister of Transportation and Infrastructure.

Through the range of community meetings and online submissions, the province has found four common themes that came from the first phase of the engagement, with participants seeking a Coastal Ferry Service which includes:

Be equitable and accessible; mitigate

Be responsive to climate change

Reflect the values of coastal communities.

As they sought the opinion of the public, the community input gathering process brought the Minister to Haida Gwaii, though in somewhat of a surprise, there was no community session scheduled for Prince Rupert which is the key Transportation hub for the North Coast.

The introduction to the feedback notes, provides a glimpse towards some of elements covered during the consultation period.

A two-phased engagement process was conducted to gather public input on how best to connect communities in the future. Phase one included seven face-to-face regional stakeholder meetings in October and November 2019 to assist in planning for a broader public engagement. A wide variety of topics were raised during these meetings that were captured under four broad themes. The feedback gathered formed the building blocks for the second phase of engagement.

On February 2, 2020, a second phase of engagement was announced with the launch of a dedicated online engagement website. All British Columbians were invited to provide feedback to help inform the vision. The engagement period was open until April 17, 2020. The online process gathered input from 4,937 participants who completed the questionnaire.

The commentary from the North Coast, Central Coast and Haida Gwaii, whether in person or by way of online contribution would seem to indicate some work yet to be done for service to the region, with Satisfaction Levels low and the call for areas of improvement noted. 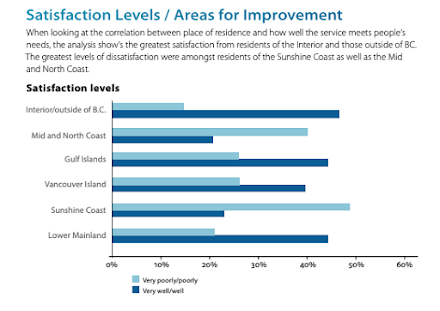 The full feedback from the public can be explored further here, the Minister will be reviewing the findings with the BC Ferries Board, The BC Ferries Authority, its shareholders and the BC Ferries Commissioner.

Some of our past notes on Marine Transportation on the North Coast and Haida Gwaii can be explored here.