"It's going to be unlike any campaign before': To the polls we go .. as Premier John Horgan sets election date of October 24th for British Columbians to cast a ballot

And they're off, after a consultation with Lieutenant Governor Janet Austin, Premier John Horgan announced that British Columbians would be heading to a polling booth on Saturday, October 24th, Mr. Horgan making his call to the polls at a Monday morning press conference from his Langford neighbourhood.
As the candidates head out to the political hustings, the Premier outlined that Finance Minister Carole James, who is not seeking re-election, will be watching over the operations of government during the campaign period.
Among the themes that led to his decision, Mr. Horgan made note of how British Columbia was in uncertain times,  and required certainty; noting how the ongoing work on the pandemic requires a strong mandate to continue ahead with confidence.
Towards the campaign, the Premier observed that despite the current focus on social distancing and small groups, the candidates will find a way to connect with constituents and to get their message across.
For those expressing concerns over COVID and in person voting, Mr. Horgan made note of the mail in ballot option, along with the precautions that Elections BC will have in place as voting day arrives.
Certainty and stability for government and the need to put politics behind us seems to have been the key element for today's announcement.
Mr. Horgan observed that he didn't believe that the current political situation was stable, noting that to him the evidence spoke differently as to whether the NDP had the support of the Green Party, something that the Green leader Sonia Furstenau offered a different take on earlier in the morning.

The BC Liberals also made note of the current focus on the pandemic and questioned the wisdom of the election call of today.

Un-necessary or not, British Columbians will deliver their verdict on the Premier's political gamble on Saturday, October 24th.

British Columbians last went to the voting booth on May 9th of 2017, a campaign which saw three candidates contest the North Coast seat.

In that 2017 campaign, when all the door knocking and debating was done, it was the NDP's Jennifer Rice gaining re-election, that after taking on a fairly tough challenger in former Prince Rupert Mayor Herb Pond.

Ms. Rice secured a strong mandate of 57.4 percent of the vote of those who cast a ballot in the 2017 campaign

Also running in that campaign was Hondo Arendt, the Coast Mountain College instructor who was contesting the seat on behalf of the Greens.

As for the road ahead, other than Ms. Rice, who last week noted for the local newspaper of her plans to run again, the rest of BC's political parties are still in planning mode. 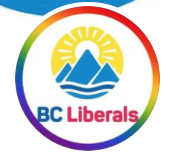 Despite all the speculation of recent weeks of a potential election call, the North Coast Liberals did not seem to find much urgency towards the local scene.
Their social media page one mostly of challenges to past NDP announcements, though most of the content one which featured few themes of a local nature.

The BC Green party seems even less organized on the North Coast, not even listing any riding associations, let alone any candidates for the Northwest on their website.

Other ridings to watch in the region will be Skeena where Ellis Ross took the riding as a gain for the Liberals in the last election, as well as Stikine where the retirement of Doug Donaldson sets the stage for what may be a nomination battle for the NDP and an opportunity for a Liberal steal in the October vote.

You can keep up to date on who will contest the 2020 campaign from our Northwest archive page here.