Considering the forecast of late Saturday, the North Coast handled the arrival of a very fast moving pacific front quite well, with the occasional burst of strong winds and periods of heavy rain, but not to the volume that any significant impact was felt around town, at least as far as any reports today would indicate.

While there had been predictions of up to 100 mm of rainfall in the twenty four hour period, officially Environment Canada observed 36.3 mm on Sunday, which we all seem to have weathered well if you will.

There have been some areas of note though from the burst of fall weather, the most dramatic visual coming from the Prince Rupert Ground Search and Rescue group which posted some video to their Social Media stream from near the Shames Creek area last night, offering a glimpse as to how high the rushing water gets to the highway and railway bridges in that area.

The Northwest returns to the theme of precipitation this week, with showers today and then periods of rain overnight and into Tuesday. Things settle a bit through the week with occasional showers, but another pacific front is on the way for next weekend.

Whether the oncoming weather will reach the need for public alerts from Environment Canada won't be known until we get closer to Friday. 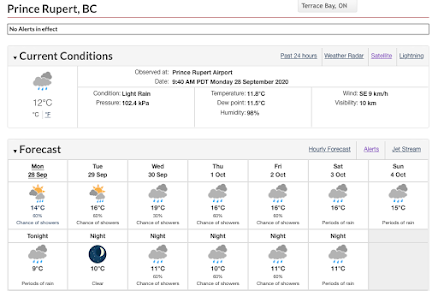 More weather related notes from the Northwest can be explored here.