Making her first comments since the call of the Provincial election on Monday morning, North Coast MLA Jennifer Rice took to her social media stream this morning to share a few thoughts on the campaign to come.

Framing her message in much the same themes as that of the Premier, the MLA observed how the decision for voters on October 24th will be to decide on how British Columbians choose to move forward in these unprecedented times.

Ms. Rice also makes note of some of the work she has accomplished during the last three and a half years on the government side of the Legislature, noting the restoration of ferry services, new housing in the region, highway improvements and child care initiatives.

As for the campaign road ahead, she didn't offer much detail on her plans, other than that she will be taking to the political hustings in a socially distant way. 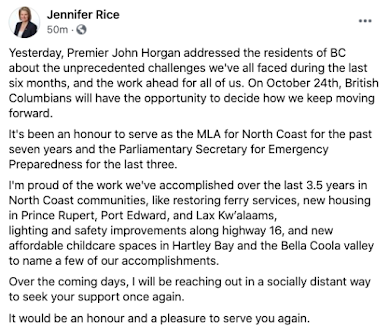 So far, Ms. Rice is the only candidate running in the North Coast constituency, neither the BC Liberals or the BC Greens have announced their plans and whether they will contest the riding.

You can follow the NDP MLA's political themes as the campaign moves forward from her social media stream.

Yesterday we took a quick snapshot of the North Coast riding, providing the benchmarks from the 2017 vote and the challenge of taking on an incumbent that faces those who may wish to take the political plunge.

For more notes on the campaign as it moves into high gear follow our archive page here.