The political road  for Premier John Horgan didn't quite make it to Prince Rupert this weekend, wrapping up on Saturday with a short stopover in Terrace,  as well as quick trip to Kitimat, as the NDP brought their re-election campaign to what many suggest may be a key political battle ground come October 24th.

One of the focus points for the Premier, who was accompanied by Skeena NDP MLA candidate Nicole Halbauer was a stop at Mills Memorial Hospital in Terrace, where the Premier once again noted how the Mills replacement project remained a key priority for his government.

That visit to Mills Memorial has made for a short social media message for the first week of the campaign.

The Skeena riding which was once an NDP stronghold, was taken by former Haisla leader Ellis Ross in the 2014 election, with the BC Liberal MLA gaining a high profile over the last three years as part of the Liberal opposition.

Such is the importance of the riding as a potential swing, that the Premier spent much of his Saturday also checking in with are first Nations leaders, holding meetings with Eva Clayton, President of the Nisga'a Lisims government, Kitsumkalum Chief Don Robert and Crysatl Smith the Chief Councillor of Haisla Nation.

The itinerary for the weekend did not include a trip to Prince Rupert to lend a hand to the campaign for North Coast MLA Jennifer Rice and her quest for re-election on October 24th. 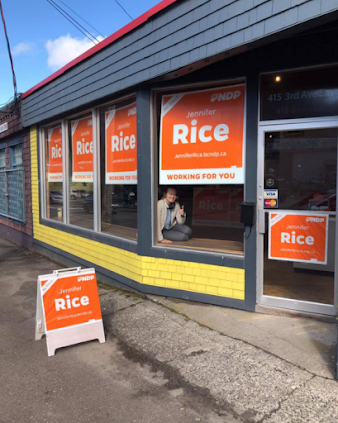 With or without the Premier's help, Ms. Rice kept busy, setting up her campaign office, located in the Cow Bay area of Prince Rupert, with a group of volunteers getting things set for the month long campaign ahead. 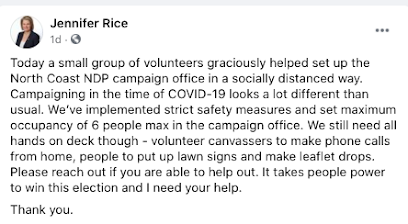 More notes on the 2020 campaign can be found from our archive page here.