The residents of border straddling Stewart, BC and Hyder, Alaska continue on with their efforts to get a bit of common sense to prevail in Ottawa and allow the two communities to include each other in their social distance bubbles.

As we noted last month, the main focus of their concern is education, with Hyder children relying on the Stewart school for their education and with the ongoing border closure, class remains out for those on the Alaska side of the border gate.

Skeena-Bulkley Valley MP Taylor Bachrach once again has taken their concerns to the Federal government, asking for special consideration of the unique situation presented by the Hyder situation, which for the most part has their residents all but isolated from their own state and currently barred, except in certain circumstances, from entering Stewart where much of their commercial and social life is found. 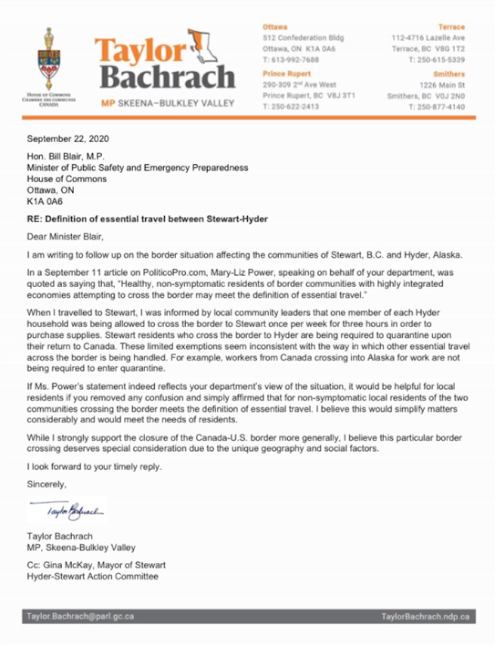 It's never really been explained by the Federal Government why the ongoing efforts of those living in what in effect would be a Stewart/Hyder bubble have not bee replied to and more importantly acted on.
For the most part it's pretty clear to those of us living in the Northwest,  that the Hyder residents, with no access to any area of COVID concerns at the moment, would not pose a threat to the residents of Stewart and the fracture of what is normally a flowing border of goodwill is something the federal government should remedy quickly.
As is often the case, neighbours find ways to work around dumb rules and this is best shown by the recent convoy of trucks from Stewart into Hyder to provide the Alaskan community with much needed fire wood for the upcoming winter.
The Federal government could take a lesson from that work around by the two communities and provide some relief from the restrictions, allowing neighbours to continue to be there for their neighbours.
The two communities have created a COVID-19 Action Committee, you can keep up with them and lend a hand or a signature to their cause through their Social Media feeds.

More notes on Federal themes can be explored from our House of Commons archive.