Fibre optic link to Ketchikan has landed on Alaskan shores

A project to provide for improved internet service to Prince Rupert's neighbours to the north in  Ketchikan has made some big strides, with a fibre optic cable from the North Coast to Alaska now having made landfall on Alsaskan soil.

Ketchikan Public Utilities announced earlier this month that the undersea fibre optic cable landed at Mountain Point via barge in the first week of September.

The last water based leg of the installation project had  its start 100 miles to the south at Dundas Island, where the cable was laid along the seafloor on its path northward.

The project found a few delays recently as rough weather in Dixon Entrance reduced the scale of the work, with crews making use of the recent breaks to bring the cable north.

CityWest has been part of the planning for the fibre optic link, which Ketchikan voters approved as part of a bond plan for funding of the project late last year.

The North Coast Review forwarded an email last week to CityWest seeking some local comment on the project, but was advised that as of yet, they had nothing to share on the reports of the Alaskan landing.

KPU has not indicated when the final installation will be in place and the new fibre optic link put into use.

A look at some of the past notes on the fibre project can be reviewed here. 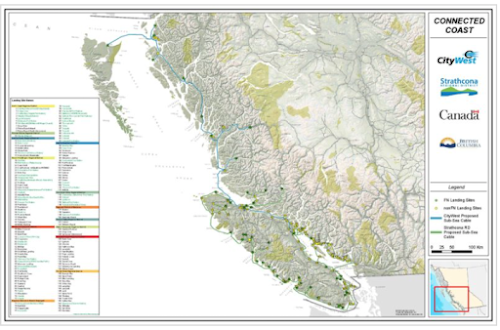 CityWest currently is working on another Fibre optic project, that one the much anticipated Connected Coast fibre link which will provide for a secondary backbone for CityWest customers and provide fibre optic infrastructure for Haida Gwaii, the Central Coast and much of North and Central Vancouver Island.

That project has however hit a few snags along the way and appears to be just a bit off of its ambitious timeline.

As we noted in August, the latest notes relayed on the status of that project came last month when CityWest and the Regional District of Stratchona issued an RFP seeking out the services of a contractor towards the project.

In that documentation, CityWest indicated that it plans to create a subsidiary company to construct and operate the Connected Coast project.

As they have yet to announce a route or design for the project, there is no fixed timeline indicated as to when the work will get underway.

There have also been few updates of late as to the progress of the project provided to the official page for the Connected Coast project.

More notes on CityWest can be explored from our archive page.