With election drums sounding, Nathan Cullen announces quest for the nomination for NDP in Stikine

One of the top rumours of the last week or so came to reality today, with word that Nathan Cullen, the former MP for Skeena-Bulkley Valley, will now seek out a seat in the British Columbia Legislature with Mr. Cullen announcing his intention to seek the nomination for the Stikine riding through a video message on Social Media.

The opening in Stikine will come at the call of the next provincial election, that after current MLA and Minister of Forests, Lands, Natural Resource Operations and Rural Development Doug Donaldson announced his plans to step down earlier this week.
Speculation has run wild around Victoria over the last few days, as a string of other high profile NDP members announce their own retirement plans and the Premier drops hints to the Legislature media of the possibility of an election this fall.
In addition to Mr. Donaldson, among the names so far preparing to step back from the political fray at the drop of the writ are Cabinet Ministers, MLA Michelle Mungall, Shane Simpson and Scott Fraser.
Legislature reporter Rob Shaw is one of a number of political observers to note that Mr. Cullen's quest to replace Mr. Donaldson, may run afoul of the NDP's previous commitments towards equity themes. 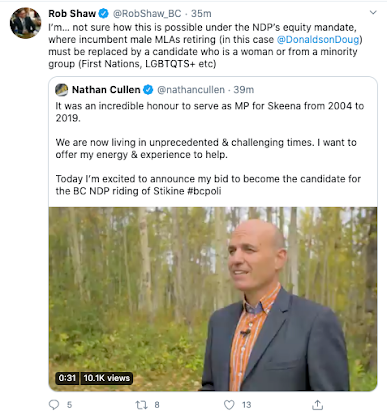 CBC Northern British Columbia's Andrew Kurjata made much the same observation on Wednesday, that as Anita McPhee, a three term past president of the Tahltan Nation announced her intention to seek the nomination in Stikine.

Mr. Cullen is not the only former NDP MP to look to give provincial politics a run, yesterday Murray Rankin announced his intention to run for John Horgan's potential platform points in the Victoria area.
Mr. Rankin shared his enthusiasm to be joined on the campaign trail by Mr. Cullen with a Social Media shout out today.

You can review Mr. Cullen's notes on his quest, as well as the commentary to his social media announcement through his Facebook page.
So far, Premier Horgan has not set in motion the path back to the polls, though with each announcement of new recruits that announcement seems closer and closer.
More notes on the Stikine constituency can be reviewed from our archive page.
For more notes on the provincial scene follow our political archive D'Arcy McGee
Posted by . at 4:06 PM