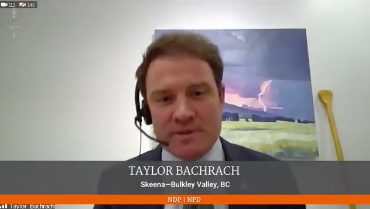 The lack of progress when it comes to connecting many rural areas of Canada to the online world made for the theme of a contribution to Tuesday's House of Commons work, with Skeena-Bulkley Valley MP Taylor Bachrach raising the issue during Question Period.

Speaking towards the end of the daily opportunity to raise issues of concern, Mr. Bachrach made note of past government promises towards connectivity and how the timeline towards connecting communities is not moving very fast.

Of note for the Northwest, Mr. Bachrach called particular attention to the ongoing delays for Haida Gwaii and other areas of the region and the issues that it is creating for those who rely on the internet more and more these days.

"Many rural residents in the Northwest can’t work remotely because they don’t have good enough internet. They can’t go to school online. And they can’t access government services. It’s unacceptable during normal times but even more during a crisis. "
You can review his Q and A with Liberal Cabinet Minister Maryam Monsef from his Facebook page here.
Prince Rupert's CityWest is part of a partnership with the Strathcona Regional District on Vancouver Island that is developing the Connected Coast project to significantly expand Internet access for the North Coast, Vancouver Island, Central Coast and Haida Gwaii.
Towards the project, the City of Prince Rupert owned communication company has created a new company, CityWest Connected Coast Network Corporation which will be its focus for the project; though little has been outlined by CityWest to date, as to how that company will be structured and what investment CityWest will be making towards setting it up.
When it comes to progress for Connected Coast, as we noted in late August, the path to a start for the project has been somewhat slow in moving forward.
So far there has not been much in the way of detail provided as to timelines for construction and when those looking for improved internet connections may realize the much anticipated arrival of improved and reliable service.
The latest updates for the Connected Coast plans can be explored here.
For more items of note from the House of Commons see our archive page here.