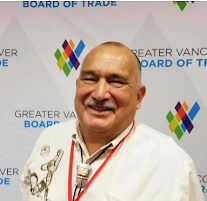 BC Liberal leader Andrew Wilkinson got a bit ahead of his own North Coast constituency last Friday afternoon, breaking the news on the candidacy of Hereditary Haida Chief Roy Jones Junior as the party's candidate for the 2020 provincial election.

The roll out of Mr. Jones, was one of a number of candidates named by the leader late last week.

Sunday evening, the North Coast Liberals made it a formal announcement, with a notice to the riding association's Facebook page that introduces the candidate and charts a few topics that may come up for discussion on the campaign trail towards the October 24th election day.

As they head into the campaign, Liberal officials on the North Coast are noting how Mr. Jones is the first ever Indigenous candidate for a major political party to contest a provincial election on the North Coast.

“One thing has to be clear. As a first nations candidate, and as your next BC Liberal MLA for North Coast, I will be here for the greater community, as we are all in this together. I will have an open door policy to ensure that you have a voice in the government of BC. I will bring your voice to the table and I promise, nothing is off the table."
Some of the themes we may hear about over the course of the next month include, the ongoing decline in industrial opportunities, particularly those found in the fishery, as well as the need to ensure opportunity is found here to stop the outward flow of youth looking for employment and to bring back those who have left previous.
He also outlines attention towards education, keeping the family unit intact, job and training opportunities and environmental themes as some of his points of focus for the days ahead.
You can review the full election launch here. 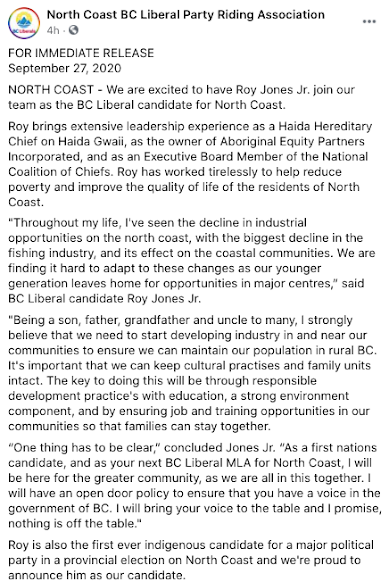 For the latest notes on the 2020 provincial election campaign see our archive page here.
Posted by . at 9:25 AM