Province of BC to City of Prince Rupert: On Conservation Service officer for the city; not enough frequency of calls to warrant position

With a recent wildlife encounter still creating some buzz around the community, Prince Rupert Mayor Lee Brain provided an update Monday night, outlining the response to the city's request to have a Conservation Officer based in the community.

Mr. Brain opened his remarks by making note of an incident last week with a black bear, as well as past incidents with wolves, though not speaking directly towards the shooting of the bear by the RCMP on Thursday evening.

The Mayor's focus was on the content of a letter from BC Cabinet Minister George Heyman, with the mayor offering up a short synopsis of the comments.

No copy of the correspondence from the Minister of Environment and Climate Change Strategy, has to this point been provided to the city website, or social media streams for community review.

Mr. Brain also provided some background on the data that the province provided in defence of their approach to conservation officer issues.

The Mayor noted that the City plans to continue with its advocacy towards a solution to the situation in the area.

"In their view, Prince Rupert just doesn't have the call volume to warrant a full time Conservation Officer, whether that's warranted or not, I think we're going to continue to have further discussions with the Ministry about it.

I think there might be that opportunity, and I think Council feels the same, we'll also reach out to the MLA and see if we can figure out some kind of solution to this ...

We do appreciate getting an official response from the Minister but I just wanted to make sure that the community knew that we were following up with what the community has been asking of us in that we want to lobby the province around that, and we will continue to have that dialogue and see if we can come to some kind of resolution."

Councillor Adey also spoke to the topic, noting on the ongoing nature of development is resulting in some of these encounters and how any incident related to wildlife has an impact on residents, observing  how those in the area do have responsibilities as well on the topic.

"I also think that we need to take some of the impact and say well, this means we have to rethink some of how we behave and I think particularly around how we deal with garbage, how we store garbage. Making sure that there are proper sealed containers, rather than you know just putting the garbage out in bags that the ravens can get into. Some of these things are really on us as individual residents that can help to improve the situation."

The Mayor followed up by noting that the City has a role to play and has offered up a reminder through the city website and Social Media streams on the Bear Awareness protocols that are required. 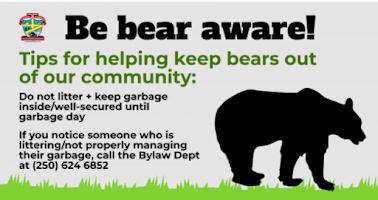 While they put some of the onus  on the public to be more proactive when it comes to wildlife encounters, none of the Council members spoke to the incident of note last week. Particularly towards the lack of any warnings or advisories for the public when it came to the wandering bear of Thursday.

For the most part, the only indication of potential danger for the public came through Social media posts from city residents as the bear made his travels around the west side of the city, with the City's own website and Social media stream offering no guidance for the public at the time.

You can review the full discussion on the Conservation Officer issues from the City's Video Archive starting at the seven minute mark.

Further notes on Monday's City Council Session can be found from our Council Timeline.

Past discussions on Conservation Officer issues and other themes can be explored from our Council Discussion Archive page.